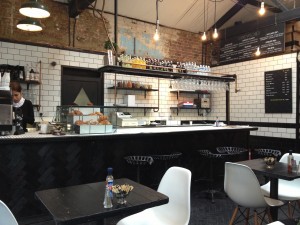 Spring is naturally a time of new beginnings, or at least it will be when it arrives. In the meantime, I have made some changes of my own – principally preparing to move from my flat in Battersea to a new one almost 200 metres away, like some kind of intrepid Ranulph Fiennes character, without the frostbite. My new place is more spacious, has a beautiful balcony overlooking the park, a gas hob (screw you, ceramics,) a dishwasher, and is even going to have someone else living in it with me. Brave new world indeed.

This is clearly a familial thing, as my brother has also just moved – to Clapton, which appears to have got a lot nicer than it was in the early nineties. Back then I used to head there in my capacity as bar manager of The Dove Freehouse with bundles of cash secreted about my person to pay off various creditors in financial transactions I didn’t understand, or didn’t want to. It’s hard to square the downtrodden Broadway Market of twenty years ago with its present incarnationation as a mecca of painful trendiness and bespoke Scotch eggs, but the tentacles of gentrification are reaching out ever further, and now appear to have made it as far as Clapton. 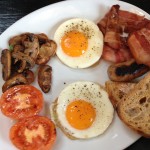 My brother’s new home is one of a number of flats (or ‘Scandinavian Housing Commune’ © his girlfriend) set back from the more traditional terraced streets and is almost as nice as my new place, although it does fail the all important ‘being in Battersea’ test. The recently established Tram Depot Café is a ten minute walk away, and it was here they took us for brunch to prove that I was a dick for making up such a test in the first place.

The Café itself made an excellent first impression – a big, bright space, all white tiles, black painted iron stools, copper piping and brickwork, exuding a kind of bohemian 1940’s feel. There is a gallery at the back, and piles of Sunday papers – it’s the sort of place where you feel you could knock back a couple of good coffees, read up on the state of the world, and then go and make some really great art about it, had you any artistic talent at all, which I don’t. You can find out all about the project on the website, so I won’t go into details here, but suffice it to say, it’s exactly the sort of thing you want to see succeed in austerity Britain, and as we set about ordering, I was suitably optimistic. 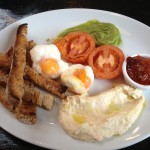 Which is why what followed was a little disappointing. We started well – my brother had banged on about the mochas to such an extent we had to try one, and it was gorgeous – like one imagines that mug of hot chocolate plucked from the river in Charlie and the Chocolate Factory might have tasted, had it contained coffee. My spinach, beetroot and ginger juice was clearly doing me so much good it didn’t even matter what it tasted like, and as a result I didn’t mind the wait for the food.

I pottered off to the most enormous single loo I have ever been in, only to discover that the lock on its sliding door didn’t work, which I can see causing problems as it does open out onto the dining area. On the plus side, they’ve got space for another couple of tables in there, although it’s perhaps not everyone’s favourite place to eat. I then ventured into the back room to look at the art, which was, er…not to my taste, but it’s a good sized space with lots of natural light, so I hope to go back there when it is. 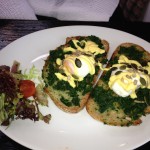 Unfortunately, this mix of good things somewhat scuppered by their execution extended to the food. Having just discovered, thanks to bastard genetics on my father’s side, I have high cholesterol, I’m presently trying to avoid red meat, animal fats, dairy products and fun in general, so I went for the vegetarian breakfast. One thing that you need to get right at brunch is eggs – sadly, what arrived on my plate were two rather small hard yolks encased in a little white (with added shell) that had allegedly been poached, but were both fridge cold. Houmous and guacamole were a nice addition, although I’m not sure what sweet chilli sauce brought to the dish. At least it was brought, which is more than can be said for the mushrooms. When this was pointed out, some tepid ones were produced, but it’s safe to say they were not in their first bloom of youth. Meanwhile, across the table, eggs Florentine looked delicious with their sprinkling of pumpkin and sunflower seeds, but the whole dish was stone cold. My brother’s girlfriend was far too nice to say anything until she’d almost finished, by which point it seemed churlish to send them back (to be fair to the waitress, she did offer to replace the eggs when it was mentioned.) 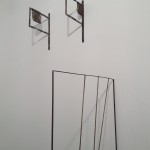 Some art I’m going to avoid commenting on

On the other hand, my other half’s full English was really very good, as she continually reminded those of us with the cold (or ‘quirky’ © my brother’s girlfriend) eggs. A large Cumberland sausage sandwich with cheese, fried egg, tomato and hashed potato was exactly the kind of hearty thing you want to tuck into late on a Sunday morning, even if you can’t because your arteries might fur up immediately, apparently. Clearly the Tram Depot Café can fry an egg, they just couldn’t poach one on this occasion, and I suppose we must take our share of responsibility for not pointing out the problems sooner. The bill came to forty quid for all four of us, and I’m sure we shall be returning to find it has sorted out its teething problems. This is the sort of place you hope becomes part of a brave new Clapton, even if it can’t do much about its complete inability to be in Battersea.