It’s not too far from Penrith, but I’d come on holiday on purpose. Well, not really a holiday, but a couple of days off in the Howbeck hotel in Windermere (voted ‘funkiest’ B&B by the AA last year – I’m not sure how a B&B gets voted funky, but lovely staff, breakfasts involving black pudding and an upgrade to a room with a spa bath certainly help.)

I don’t know if you’ve been to the Lake District. There’s so much breathtaking scenery you could be forgiven for bringing a ventilator, but luckily there’s also plenty to keep the cynic entertained. How many terrible galleries can one area support, for instance, and why do they all have the same shockingly bad picture of a red stiletto shoe on sale? Not to mention outdoor sports shops. There are literally thousands – it’s like the camping equivalent of Douglas Adams’ Great Shoe Event Horizon. If you want walking poles and appropriate footwear, you can buy both and then browse appalling pictures of the scenery to hang in your brand new tent without once setting foot on a fell. Or you could just wander around a big lake in unsuitable clothing and moan about fresh air and natural beauty just in case anyone realizes how much you like it.

You could also head to Grasmere to criticize the unbearable tweeness of the Gingerbread shop(pe?) or you could just buy some, eat it and shut up as your mouth is now doing something worthwhile. Pleasingly chewy, totally delicious. From there, I must recommend Tweedies bar in the Dale Lodge Hotel, where they have had the brilliant idea of serving beer on a paddle. By which I mean they give you a bit of wood with three holes in it, which they then fill with three third pint pots of your choice of ales. I hate to get old and chunky jumpered about this, but I’ve gone right off lager – I’m normally a Guinness drinker anyway – and this is exactly the sort of place to get boring about real ale and how it actually tastes of something. I had a stout and two bitters, one of which was called Hare-Straightener, reflecting the inevitable punning tendencies of your average brewer, and the fact that if you can’t find a crap picture of a stiletto in a Lake District gallery, there’ll be a crap statue of a hare somewhere nearby instead.

An open top bus past Wordsworth’s later and we wandered down to Bowness with a vague recommendation for The Angel Inn. At first I was more concerned that I’d just passed the second fish foot spa I’d seen. I had thought that the claim to be ‘The Lake District’s leading Fish Foot Spa’ in Ambleside was an unnecessary boast, but now I’ve seen three. The entire area is obsessed with feet. Luckily, mine took me up the stairs and through levels of beer garden to the pub. I love a beer garden with levels. It gives you something to aim for. This was clearly reflected in three separate signs telling you to find a table number before ordering – it felt a bit heavy handed, but when your main criticism of a venue is that the signs are too helpful, you know you’ve struck gold. The place looks good inside too, with pictures on the wall that didn’t make me want to wrap them around chocolate or punch them repeatedly. The restaurant appeared to be full (on a Monday) but I didn’t make it that far as, happily, the bar got in the way.

I was weighing up Cumberland Ale vs Conniston Bluebird, when the barman handed me a free sample of the former, so it felt rude not to order a pint. This set the tone for some excellent service – I had hardly sat down in level 1 of the beer garden (Table 40, I thank you) before my starter arrived.

Potted shin of fell reared beef with sourdough toast and homemade piccalilli. Just typing it has made my mouth water. This was stunning – deeply flavoured, toothsome, unctuous (all those adjectives) shin, packed moistly under a melting disc of fat-I-pretended-was-butter, spread on still hot sourdough and one of the best things I have ever put in my mouth ever. 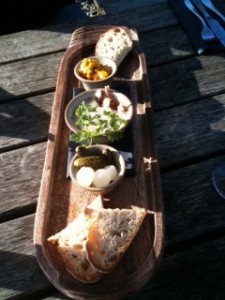 The homemade piccalilli, cornichons and pickled onions were the perfect accompaniment, and I started making noises that had level 2 looking down on us disapprovingly. No sooner was this whipped away (I may have been licking the pot) than the mains arrived. I get tetchy at the best of times about slow service, but the speed with which a busy kitchen was producing food this good should be remarked upon for novelty value if nothing else. I recently waited over 45 minutes in Leeds Nando’s for some chicken – not that there’s much else to wait for in Nando’s beyond the chance of ringside seats at a teenage fumble. The only criticism of my duck leg confit might be that a small corner of the skin was a little floppy, but these things happen to us all, and that was only the one leg. They’d rather winningly brought two, and the perfectly cooked meat combined beautifully with fondant potato, onion marmalade, spring cabbage and a slightly under seasoned smear of squash. Similarly, the Shepherd’s pie was fantastic – I’d almost describe the filling as fruity thanks to the sweetness of the peas and the carrots, but that would be to undersell its proper meatiness, topped by perfect mash.

I had to head to the bar again to give the Bluebird a go, which led inevitably to an accidental pudding order. Burnt lemon custard with strawberries and shortbread arrived pretty much before I’d ordered it and was a fitting end to one of the best meals I’ve had in a while. I won’t insult The Angel by adding ‘in a pub’ to that last sentence because it’s neither necessary nor appropriate. At £50 for two, with drinks, this was superb.

If you’re going to call yourself a brasserie, on the other hand, you immediately set your stall out a little higher. The next evening, following Trip Advisor, we headed to Mojos Brasserie in Winderemere and I have to report that it has sadly lost its.

I’m loathe to write nasty things because the staff were terribly nice, but the fact that they asked us four times if everything was alright over one starter and two mains did give you the suspicion that they weren’t enormously confident in the kitchen either. A Cumberland skillet of black pudding, sausage and bacon was quite tasty if a little stingey, and accompanied by a few salad leaves and little spots of pesto, which just seemed a bit odd. Beef cobbler was ok, if again somewhat ungenerous, especially on the cobbler front, and my lamb was fatty, but not unpleasant. Vegetables were, er…there, but what did stand out were the brocolli fritters. All I’ll say is that if even the Japanese have trouble tempura-ing something, probably best not to batter it when you’re English. The Scots have their own rules. At £35 with a couple of glasses of wine, I didn’t feel too hard done by, just really underwhelmed and a bit hungry.

On the plus side, there were no pictures on the wall, which probably reflected the only seriously good bit of taste on display. Any stilettos and I’d have been off. Looking around at the other diners, I got the feeling that these might have been the people who went on Trip Advisor and were just pleased not to be too disappointed. When an American couple sat down and asked what a cobbler was, I wanted to rush over and tell them to nip down the road to The Angel before they could have their prejudices about English food confirmed. I could also have told them that a cobbler was something to do with shoes, but this being the Lake District, they’d probably have expected that.