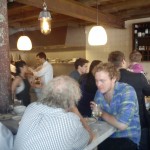 Having never been to the Dome before, and only really being aware of its farcical role in the dawn of a new century, the fact that it is now quite a good music venue is of little interest to me, or will be until I go and see The Fall there next month, at which point it had better rock. However, as a friend was completing Run to the Beat, which finished right outside, I was able to go and have a nose close up. Surprisingly, I found myself rather taken with the large tent where the Queen held hands with the Blairs to sing Auld Lang’s Syne (where was that river of fire?) to compound the nation’s embarrassment at having held a New Year’s Eve party that was less a celebration and more a happening waiting to accident.

The Union Square inside the venue is fighting a brave, if losing battle against its inevitable corporate soullessness, but as we stood around congratulating those who’d actually done anything apart from turn up to a pub on a rather nice Sunday, it became apparent that, due to an unspecified cock up, half our number had repaired to Bermondsey for lunch. As a result my friend and I had to join them in José, which turned out to be the happiest accident of them all.

I am no expert on Spain, but I know what I like and I really like good tapas, as was evidenced by my recent visit to the excellent Iberico in Nottingham. The vibe here is rather different, which is only to be expected given the size of the place (tiny,) the light (from the big yellowy thing in the sky) and the location (the bohemian oasis that is Bermondsey St.) Tapas is generally such a civilized way to eat, as the growth of ‘small plate’ dining over here would seem to attest – see Terroirs, amongst others, for details – although I did once eat at a short-lived ‘Italian tapas’ place just off Carnaby Street which was as wrong as it sounds. I have seen some some complaints flying around the internet concerning how busy José can become, and it is fair to point out that in Spain, this would be just one of a number of eateries you could dip in and out of before you slipped into a sherry induced siesta or started complaining about the bullfighting ban. However, one (Juan?) José is very much better than no José at all. 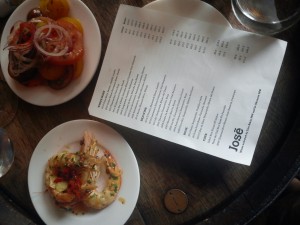 As we arrived, our party were sat around one of the few tables – most of the eating areas are along the bar or at the shelves in the windows – leaving little room for us. We stood at a barrel, which was fine – we were offered stools but declined on the grounds that my friend’s legs would probably have started seizing up if she stopped using them. Service was sunny and efficient, and it didn’t take us long to get going. I stuck to water, but my companion opted for a well deserved glass of white Rioja – it was called Tremendus, and it was. You can do serious damage to your wallet with the wine list here, but then that’s half the point. You can also save a bit and channel the funds into Iberico ham instead, which is of course what I ended up doing. The ham was heavenly, but then at £9 it wanted to be. 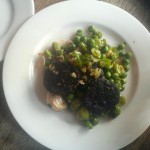 Morcilla with broad beans and almonds

The food was almost uniformly excellent, with superbly fresh ingredients, brilliantly handled. Large prawns came with just the right chilli and garlic kick while chicken livers were moist and irony in a way that even Americans could understand. A tomato and onion salad cut through the meatier dishes beautifully, including some lamb meatballs with spicy tomato sauce that my companion memorably described as ‘unlike any other meatball I’ve had – not radically, just a step to the left,’ which is of course where you’ll find all the best commentators. The squid special came with a superb allioli, although only one of the advertised runner beans turned up and the morcilla with broad beans and almonds was delicious even if I felt the morcilla a tiny touch overcooked. But this is to be terribly nit picking – the mackerel (with peppers and fantastically crispy skin) was so fresh I’m surprised it didn’t swim off. 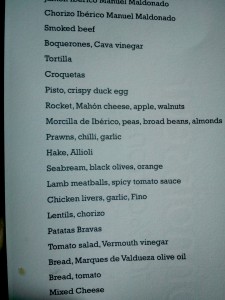 We eventually called a halt to proceedings as it was becoming clear that otherwise our waitress was going to bring us the entire menu, and finished off with a couple of cortado coffees, which were actually among the highlights of an already highlight heavy meal. Like a large cappuccino shot at perfect drinking temperature, these were, funnily enough, one of the first things we discussed later in the week over lunch in East Dulwich, more of which in the next post. Our bill came in at a pretty reasonable £59, and while I would recommend heading to José during the less busy hours of the day, the Juan* thing I would definitely recommend is heading to José, whether by accident or not.