I’m always a little perplexed by the question, ‘Where are you from?’ My stock response is ‘London’, which often fails to prevent foreigners nodding and saying ‘Ah…Manchester United’ when I’m overseas. I was born in The South London Hospital for Women and Children, which is now a Tesco, opposite Clapham South Tube station. This means I sometimes shop in my birthplace and have come an enormously long way since the early seventies. Having lived in London for the last twenty-two years, I think I can claim to be a Londoner with a reasonable degree of accuracy, but this does conveniently ignore the fact that my parents moved to the Isle of Wight in 1978, and, as was traditional at the time, took me with them. They clearly thought better of this after a while and sent me to school in Bath for most of the eighties, which further added to my confusion. As I’ve got older my relationship with the Island has grown considerably warmer as it has become more the rather delightful place my folks live and less the Devil’s Island where none of my friends are. In addition to which, some of my best friends do live there now, which meant a Sunday lunch on a recent visit seemed like an excellent idea. 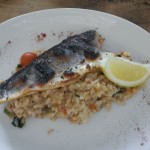 There are people who have never left the Island and its reputation for insularity is not merely geographical – one of the reasons I disliked it so much in the eighties was it felt like everyone knew each other except me. However, if there is one place that you are likely to meet other Londoners, it is Seaview – with its yacht club and second homes it has always been viewed by other islanders as terribly, terribly, and with some justification. A wander round here in the summer can feel like you’ve accidentally strayed into Conservative Central Office, and not in a good way*, but that is quite easily explained by the fact that it is a very pretty stretch of coast with a great beach and just, well, terribly terribly.

The Island was for many years something of a culinary black hole, with almost the only bright spot being the Seaview Hotel, where my family went for every meal of any importance between 1980 and 1994. Things have looked up recently with the addition of The Priory Bay Hotel and The Hambrough, with its Michelin star, which you’ll find people do mention occasionally, not to say incessantly, if you even hint at an interest in eating something that isn’t deep-fried.

The other thing that everyone (i.e. my dad) complained about for most of the last thirty years was an absence of decent pubs. I suspect this was more a rose tinted spectacle affair as he has never exactly been the personalized barstool and tankard type, but he had a point. Therefore, in the age of the gastropub, it’s not surprising to see that both the food and drink options are now being catered for rather well in Seaview.

My friends Matt and Nicky suggested the Old Fort, and although it’s been there for many years, it’s clearly upped its game recently. I arrived first, blown in by a gale from the seafront to a room that’s more conservatory than pub, but with a view across the Solent that makes this something of a plus. There’s a bit of your obligatory nautical business hanging on the walls, but the welcome, from Debbie, was hugely warm, and I tucked myself into our table with my paper, proper coffee and a little voucher promising me discounts if I stuck with the soft drinks. Shortly afterwards, Matt and Nicky arrived with other friends and family and we were moved to a bigger table with a minimum of fuss. 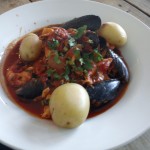 The food, advertised on blackboards above the bar, was a very reasonably priced selection of things you’d like to eat for Sunday lunch. There was a roast, but also Mediterranean fish stew, pork belly, sea bass with crab risotto, a spaghetti and proper scampi. I opted for the bass (at £10.50) on Debbie’s recommendation – the skin very crisp (a little…carbonized, even,) but the flesh still juicy, and the crab risotto quite punchy with added lemon. This was good, but the best dish was clearly the fish stew – lots of seafood with a beautifully reduced sauce, deep and silky and with new potatoes to mash down into it. The pork belly was excellent, as was the scampi – intended for the youngest present, but also quite handsome pickings when he wasn’t looking. It was good to see an Island pub full almost to capacity on a weekend in mid January, but with this quality on offer, I’m not surprised. We skipped dessert, cashed our tokens in for more coffee and counted ourselves thoroughly satisfied, apart from Matt, who had to pay for two friends who’d forgotten to do so before they left, which, considering the convivial atmosphere, was an easy mistake to make. 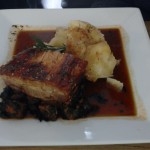 When I mentioned that I was going to write about our meal, Nicky asked me not to as she didn’t want the place overrun, thus massively over-estimating the size of my readership. I’m sure that word of mouth on the Island will be a far more effective advertisement than my recommendation, but if you fancy it, I would still advise you to book. The next day, I walked along the seafront with my mum, and on the way back we stopped in on her friend Jean for a cup of tea. I mentioned The Old Fort, and Jean agreed that it was very good – in fact, her daughter worked there. Her name, unsurprisingly, is Debbie, which probably tells you more about the Isle of Wight than I ever could.