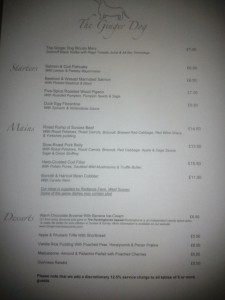 Once more to Brighton for the delights of The Komedia, which, as I have said before, remains one of the best gigs on the planet, even if it is now so popular that they run three gigs on a Saturday night that leave you running up and down stairs unsure of your own name by the end of the evening, let alone which gags you’ve told. Quite a few of the audience seem to have similar problems, although admittedly for slightly different reasons. To be fair, it’s hardest for resident MC Stephen Grant who manages the impressive feat of compering two of the shows simultaneously, the very typing of which makes my head throb slightly. Though possibly not as much as many other heads the next morning – this is, indeed, a place that likes to party.

I have eaten in Hove’s thumpingly excellent Ginger Pig a couple of times, and can genuinely say it is one of the best restaurants on the South Coast. More a restaurant with a small pub attached to the front of it, both times I have eaten there I have come away with taste buds singing and superlatives flying. I have also heard great things about The Gingerman and The Ginger Fox, and as an erstwhile ginger myself, I was thoroughly looking forward to Sunday lunch at Kemptown’s Ginger Dog, which I am led to believe is the pubbiest of the group. The interior didn’t disappoint, although clearly with the number of tables they have crammed in, the emphasis is again more on the food than the pub. Nonetheless, it was nice to see a happy group of regulars congregate around the bar as the afternoon progressed, although they may well have been drawn there by the funky top hat lampshades that hang above it. 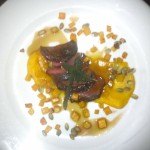 Wood pigeon with pumpkin and sage

We arrived half an hour early, but were directed straight to our table by one of three or four cheerful staff. It was horrible outside, and walking into a pub where people look up and actually smile really is a neat trick to start things off on the right foot – it’s amazing how often some pubs cock it up. The menu was fairly minimal traditional pub lunch, which, as that’s what we were there for, is no bad thing. There were specials on the blackboard for each course, but I went for five-spiced wood pigeon with squash and pumpkin seeds, and pork belly for main course. Over the table was roast beef only. My starter was attractively plated, topped with a couple of deep fried sage leaves and the pigeon breast almost stood up to the sweetness of the squash – almost, but not quite. I would have like a little more of the iron tang of the pigeon to balance the dish, but I really shouldn’t complain about the portions when I didn’t quite have space for my main course. Glazed carrots were excellent, as were the roast potatoes, the brocolli and the stuffing. I could also recognize the quality of the red cabbage, even though I’ve been trying to like the stuff for decades and still can’t quite manage it. The square of crackling was exemplary, but sadly,  the sizeable chunk of pork belly it sat upon was just too dry, and didn’t fall apart into moist shreds under the knife as it should. It’s a real shame when the star of the show is a disappointment – I’m not sure if it had been cooked too long, or at too high a heat, but it’s very unusual for me to struggle with pork belly. The beef was a lot further along than we would have liked as well – there was no disputing the quality, it’s just a shame that it wasn’t a little bloody for a couple of Sunday carnivores. 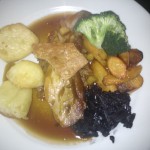 Having stuck with water throughout, I decided to risk a Bloody Mary, which seemed a little under powered until I got to the bottom of it, whereupon I sucked back a huge glug of Worcestershire sauce, which isn’t anyone’s idea of fun. There was some very good espresso and a couple of glasses of very reasonably priced white Paradosso for my companion, and an overall bill of £50 excluding service, which is quite steep, if not indecent, for Sunday lunch. By this time, the pub was filling up with the millions of families that one imagines have all moved to Brighton from London for the children, possibly all in the same coach, and it was time we were off. I’m sure they had an excellent lunch, and were very well looked after, as were we. My problem? I really wanted to love The Ginger Dog as much as I love The Ginger Pig and I just really didn’t. I have an overwhelming suspicion that we were a little unlucky, as with a couple of tweaks, I would probably be singing their praises unconditionally. And I will be returning to see if I’m right – after all, very few people are at their absolute best in Brighton every Sunday morning.