Even if I say so myself, I do a bloody good roast chicken. The secret is to cook it in plenty of stock under foil, which you remove for the last fifteen minutes to crisp up the skin, but which means the meat has been steamed as much as roasted, thus retaining its moisture, and providing a rather nice chickeny (which is a word) gravy with absolutely no effort whatsoever. I’ve messed about with it for my own amusement over the years, but the starting point was a recipe from the children’s author Georgia Byng which can be found here. 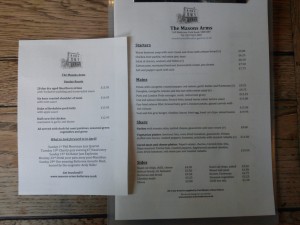 As a result, I very rarely order roast chicken, mainly because it is often a disappointment and I feel I can do it better at home. I also very rarely write a blog if my meal consists of one course eaten by myself and accompanied only by my paper on the basis that it would probably be quite dull and fairly unhelpful. Although regular readers might feel they’re already used to that.

However, having just returned from The Masons Arms, I decided to make an exception – I have eaten there many times, and the lunch I have just had seemed to me to be a fairly good barometer of what is available at an all round excellent ‘gastropub’ in the best sense of the word. The pub was providing good food and drink in Battersea for many years before I moved here (it’s almost as if my arrival in the area was not the most important thing that has ever happened to it,) and has just had a minor refurbishment. It is actually my nearest pub, although I don’t go in all that much as it is not the cheapest, and I spend so much time out and about in places where alcohol is available that when I have a night off, I’m quite keen on my sofa as opposed to yet another bar. Having said that, I did pop in a week or two ago for a mid-afternoon Guinness (because I can) and got chatting to the manager, Matt, about the refurb – which, in all fairness, does seem to consist mainly of making the kitchen slightly less open and getting Fullers to pay for some new windows. Having said that, there is some nice art of the local artist type on the walls, sofas, proper tables and chairs, occasional live music, a quiz and some genuinely friendly and helpful staff who strike just the right balance between being waiting and bar staff. They seem happy in their work, which is always the first step in making sure you’re happy to enjoy it too. All in all, a pretty perfect local. 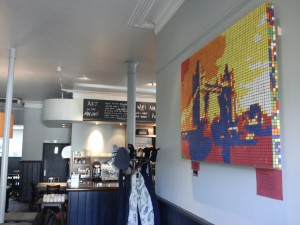 As summer seems to be doing its usual job of turning up in spring (and then buggering off again til autumn, I should imagine,) and I have to drive for a couple of hours for a show tonight, I thought I’d treat myself to lunch. There was much to enjoy on the menu, and I was sorely tempted by the salt and pepper squid, but in the end, I decided not to be greedy, and I also decided against red meat for the main course as I eat too much of it and apparently it’s going to give us all cancer. This is up there with all my other pan-flashing, teacup-storming health kicks in that I’m sure I will find myself happily sitting down to munch my way through a couple of packets of chilli biltong later, but in this case, it led to me ordering the half a corn-fed chicken. I had a very good cup of coffee and a pint of apple juice and soda water as I sat in the corner, right next to a radiator which pleasingly compensated for a day that was not quite as warm as it was pretending to be. 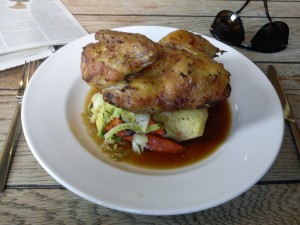 The chicken arrived with something of a flourish (I think the words were “the majestic roast chicken,”) but to be fair, this was spot on. A really tasty, and yes, chickeny, roast chicken, with properly crispy, herby (and indeed mustard seedy) skin and moist flesh, sitting on top of duck fat roast potatoes, carrots and parsnips, with a couple of different types of cabbage in a pool of very commendable gravy.  I am aware that the last three blogs have all been Sunday lunches, but there was so little wrong with this dish that I decided it was worth one all by itself, so here it is. The dessert menu was a little heavy, and as the health kick is extending to not absolutely stuffing my face on a regular basis, I decided to simply have another apple and soda and cry into the sports pages about Southampton’s 3-0 defeat to Blackpool yesterday instead. The bill came to £19.50 without service, and merely added to my opinion that I am very lucky to have such a great place so close, and that perhaps I’m not the only one who can do a roast chicken justice in SW11.

1 thought on “The Masons Arms, Battersea”