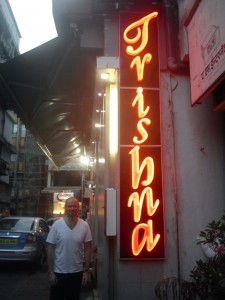 They say that travel broadens the mind, but what they don’t tell you is that one major temptation of doing a ridiculous amount of flouncing around the planet can be the quite pressing one to stay in your hotel room. This may sound daft to those of you who actually have to book time off and make proper grown up decisions about where you’re going to go on holiday, but when life is often a succession of economy class flights and anonymous hotel rooms, the desire to simply lie down in front of unintelligible telly can become quite overpowering. Having said that, I’m quite good at getting out and about when I genuinely am on holiday because I know I’m not being paid, so I try to make the most of it. I’m not complaining – the main reason I take so few holidays is because there is a fairly robust argument that my job is one long one. 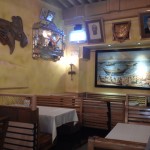 There are a number of comics who are notorious for their touring inactivism, beyond the obvious demands of getting to and from the actual gig. I performed in South Africa for a month with an American comic who not only never left his room, he wouldn’t let housekeeping in either. Coupled with the amount of room service he ordered, that room began to take on quasi-mythical status among staff and fellow comedians alike. Ask any touring comic the most consistent offenders and the same names will come tripping off the tongue. The reverse of course, is also true – Nick Wilty, for instance, can’t get off a plane without first ordering a moped and then haring off into the sunset. 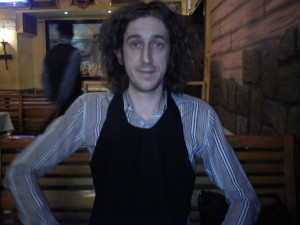 Speaking personally, I am not always the most active traveller, but am easily led. As a result, I will always be grateful to Martin Bigpig Mor for forcing me round Singapore’s nature reserves like a bearded and tattooed David Attenborough. I had one of my best ever trips wandering repeatedly through Kuala Lumpur’s Chinatown with Steve Allison, and I will always remember Zoe Lyons pretending to be my wife to secure us better pashmina prices in Dubai’s Souk – something her actual wife has always been very understanding about. Similarly, I will never forget Mick Ferry and I catching one another’s eye as we lifted the third pint to our lips during our ‘quiet first night’ on Hong Kong’s Lan Kwai Fong and one of us (it really doesn’t matter which) uttering the immortal line “This is going to turn into a session, isn’t it?” In fairness, we still managed to get up a hill to a Buddhist Temple the next day. 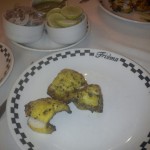 As I type this, I realise that there are so many more stories, but the reason for this somewhat lengthy preamble is to excuse the fact that I didn’t do much in Mumbai this time around. It’s my fourth visit in two years, I was only there for five jet-lagged days and I had quite a lot of work to do. I did, however, want to review a restaurant, so I surpassed myself in adventurousness by going to the same place and ordering the same dishes twice, both times with blokes called Tom. Just call me Thesiger.

The first Tom was the estimable Tom Wrigglesworth, who is one of nature’s travellers. Mainly to his tailor. At 6’4” and built like the proverbial beanpole, Tom has some difficulty in finding clothes that fit him properly and as a result has decided to prop up India’s fabric and tailoring sector on a quite unprecedented scale. He had already made his first visit (by train) when I came round from a post-flight snooze, and continued to make a daily pilgrimage to ensure production was up to his exacting standards. He also fancied dinner in the evening and had heard that Trishna did the best seafood in Mumbai. Paul Thorne, the third member of The Comedy Store’s bill for the weekend, had done his bit of exploring by going to Goa before we even started, so opted out, leaving myself and Tom to head off with Dipen, the taxi driver I first made friends with a couple of years ago and so who now sees more of the UK circuit than most broadsheet reviewers. 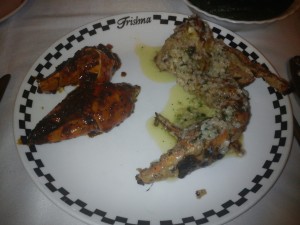 Trishna is hidden down a back street I’m not sure I would have found by myself, a doorman greeted us, and we were shown into a brightly lit restaurant with décor that I think was trying to be a boat, scurrying waiters and a pleasing sense of doing what it did well. The head waiter came over to take our order, and basically, we let him. One of my favourite things in the world is Singapore style black pepper crab (if you are ever there, try The East Coast Seafood Centre) so we had one of those, and a garlic one, by which I mean, a really garlic one. Before these arrived, we had a few little pomfret fillets, rolled in black pepper and spices and cooked as kebabs. Moist, tender, with a little peppery bite and utterly delicious. Then we afixed bibs and attacked the crabs. They were sublime. A couple of naans and a pea dish accompanied them, but this was really about dismembering crustacea and getting covered in sauces and bits and sucking flesh out of the nooks and crannies where it was hiding. This is possibly my favourite sort of eating, and we chatted merrily away as we, and the table, became more and more covered in crab detritus. We stuck to Perrier, glasses of which became dirty fingered as we progressed – Trishna’s glass washer has a much harder job than he has any right to expect – and when everything was cleared away we shared an ice cream with fresh mango; a perfect end to an exceptional meal. 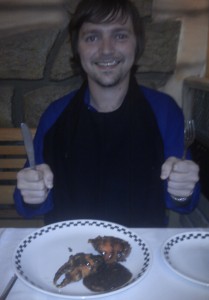 After a hugely enjoyable weekend of gigs, Tom headed off for a week’s holiday in Kerela with his wife, before returning to Mumbai and his new wardrobe next week, while Paul caught the late flight back to London. Due to a booking error, my flight was not for another 24 hours, but luckily, this gave me the chance to take Tom 2 to Trishna to show him what he’d been missing as he’d not been before. Tom has been managing the Mumbai Store for two years and I know him from London, so it was great to catch up properly, and this time we threw a rather nice bottle of Indian Sula sauvigon blanc into the mix as well. We changed the peas for spinach, but really shouldn’t have bothered as it turned into exactly the same crab horror film as before. If I was going to be ultra picky, the garlic crab this time was perhaps just a touch overdone, but with that much garlic involved, it’s very hard to take a little problem like that too seriously. We even had the same pudding.

Perhaps I should have showed more originality, but in this instance, I know what I like, and I don’t get to like it that often, so I had it twice, and I loved it. Service was impeccable, and the bill on both occasions (unsurprisingly) came in around the £80 mark – admittedly pretty stiff for Mumbai, but excellent value as far as I was concerned. I really couldn’t recommend Trishna highly enough, although of course if you do want to eat there, you will have to travel to Mumbai first, and leave your hotel room at least once, if not twice. Though if you do choose to stay in, you might be able to carve out a career on the international comedy circuit.