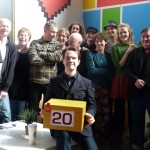 That’s me in the corner…

You know the way that celebrities get given enormous amounts of freebies, partly because their endorsement is like advertising gold dust, and also because the providers of these free services and products get some sort of reflected glory by association? Well, that sort of thing has rarely happened to me, mainly because I am not a celebrity. I did recently appear on Celebrity Deal or No Deal, but I think it’s safe to say Jimmy Carr was the celebrity there – the 22 comics standing behind boxes were mere screen filler and it should really have been called ‘Only One Actual Celebrity Deal or No Deal’ in the interests of veracity. It could also have been called ‘Watch Jimmy Balls Up Making A Lot Of Money For Charity’ but he does keep quite a sharp eye on his image, and I’m not sure they could have sneaked that one past him.*

I did once get free room service in my suite at The International Carlton in Cannes as I was doing a corporate gig there (lobster on the balcony since you ask – or haymaking with sun shining, as I saw it,) and I was once given a very useful bag with a handy compartment for my laptop that is perfect for overnight stays, but the free clothes, cars and watches etc. have generally failed to materialize, with, it has to be said, fairly good reason.

So, imagine my surprise, when, amongst all the spam comments a blog inevitably attracts, I found a message from Andrei Lesment, chef/patron at Verru, who had read my review of his restaurant, and invited me to come along and have the à la carte, on him. This sort of thing just doesn’t happen that often – to me, at any rate. I’m sure it happens to Michael Winner all the time, but I’m very happy not being him. I mention this partly in the spirit of full disclosure, but also because having met Andrei, I very much get the feeling he was aware he was not feeding Winner-lite, but is simply enormously proud of his food and wanted to show it off to someone who appreciated it. On that front, we were all winners.

I invited my friend Philippa along as it was her recommendation that brought me here in the first place, and it was near enough to her birthday to count as a celebration, so I offered to buy her dinner. We were greeted with a complimentary glass of champagne, which can never hurt, and some of the garlic bread I gushed about last time. The Maître d’ still looks unbearably young, but was kind enough not to draw attention to the fact I’d mentioned it previously, and service was once again excellent. My starter of scallops with pig trotters was simply stunning. The trotter was like delightfully chewy crackling, combining perfectly with the sweetness of the scallops, small blobs of nashi pear, dandelion and a little red curry sauce which essentially took my socks, and blew them right off. And I am hard to separate from my socks. The lamb chop with asparagus and ramsons (wild garlic) tempura opposite was also excellent, if slightly lacking the total ‘wow’ factor of my starter, but that is hardly a criticism. 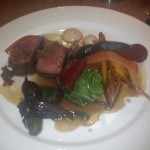 And then the main courses arrived. I had wanted to try the venison with crispy suckling pork belly, baked beetroot, rhubarb and treacle jus and luckily Phil let me have some of hers. This was a faultless plate of food, the venison standing up perfectly to the saltiness of the pork and the sweetness of the other ingredients and setting off a little symphony in my mouth. As it turned out, the orchestra was having a busy night – superb wild halibut with cauliflower, squash, mussels and lemongrass sauce was another piece of alchemy. The final masterstroke was the addition of monk’s beard, a sort of non-salty samphire that brought everything together astonishingly. We also had some green beans with garlic and the chips – because you have to have the chips, as I have noted before. At this point the orchestra had to put down their instruments to light the fireworks – I really can’t remember two more complex, tasty and original dishes appearing on the same table in a very long time. Perhaps the general feel of the à la carte is slightly more classic French than I had previously realised, but it is the addition of clever foraged ingredients and unusual taste combinations, beautifully cooked, that really make this an exhibition of Baltic brilliance. 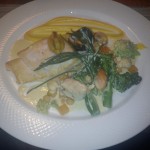 For dessert, Phil went for the burnt vanilla with rum and plum – essentially a crème brûlée – which was thoroughly acceptable, if a little bit humdrum when compared with what had gone before. I, on the other hand, ordered the forest berries, meringue and white chocolate and was transported straight back to tastebud central – a beautifully sharp, tart yet sweet conclusion to the meal. As Phil noted, “I think you won pudding”.

With a very decent bottle of Spanish white at £18.95, the bill (excluding my food) still came to £75 including service – so as you can see, not a steal, especially if you actually have to pay for your own food, which is what I imagine Andrei traditionally likes his customers to do. What is so impressive is how he plays with traditions in his cooking to provide a meal that I think would be hard to better in London at the moment, and that is great value for money no matter how you look at it. Although, of course, I would say that – I may not be a celebrity, but in the unlikely event that Andrei Lesment ever offers you anything for free, I can only advise you to Deal.

* To be fair to Jimmy, the website for his charity –  Helen & Douglas House – received so much traffic after the programme, it crashed. It’s better now, though, and you can make a donation by clicking on it.