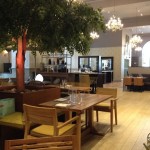 Simon Rogan occupies a deified position in the British culinary hierarchy. His Cumbrian restaurant L’Enclume is spoken of in deeply reverential tones, (and almost had a bigger part in ‘The Trip’ than Messrs Coogan and Brydon,) a pop-up in London a while back had everyone salivating, and all he has to do is burn a piece of lettuce on Great British Menu and Prue Leith at al start losing their shit. I’m not even being facetious – everybody loved the burnt lettuce so much I wanted to eat it too. I missed the recent TV show about him and Aiden Byrne setting up competing fine dining restaurants in Manchester, because sometimes life is too short, but like most people I tend to agree that while Manchester has a lot of dining, not much of it is all that fine. I can’t comment on Manchester House, although I have heard the dread phrase ‘Footballers’ Wives’ bandied about by my friend in the north who knows about these things. However, I did try and get a late table at Mr Rogan’s The French. Having seen some of the reviews, my failure, a mere three hours before I wanted to eat there on a bank holiday Saturday, was completely understandable, but having seen the prices, also something of a relief. I have no problem spending foolish amounts on food, but it’s usually a good thing when circumstances conspire to prevent me doing so. Luckily, his second, more bistro-ish venture in the Midland Hotel, Mr Cooper’s, did have space (rather a lot of it in fact) and so I trotted along the 100 metres from my hotel with my paper and my expectations. 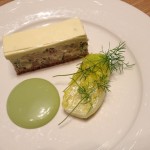 I really wanted to be impressed. I know the man whose name is above the door is unlikely to be behind the stove, but that didn’t stop me hoping for some of that burnt lettuce action, and…well, I guess you should read on if you want to know.

It was a combination of small things that led to what can only be described as my disappointment. I don’t mind that they didn’t have my reservation, and the staff were unstintingly pleasant throughout, although there did seem to be a lot of them for a pretty sparsely attended restaurant slap bang in the middle of gay pride. Far be it from me to stereotype, but I would have thought a room that seems to have been designed as a partial homage to B&Q garden showrooms would have appealed to the more kitsch elements floating past outside. I didn’t mind that the seat I was on still had breadcrumbs scattered on it, even if it was the only bread I was going to come across until I accidentally inhaled the topping of my cauliflower cheese. A slightly bent knife is never going to worry anyone untowardly, but as everything began to add up, I just got a sense that this wasn’t going to be the hit I had hoped for.

The menu gave me hope. A good ten starters and main courses that all intrigued on various levels were neither cheap nor outrageously priced. My starter of smoked eel torte with lovage and pork belly was a thoroughly elegant plate of food and even appeared with a little gem lettuce, even if it wasn’t remotely burnt. I thought smoky, oily eel and unctuous pork belly would be a winning combination, but buried under an almost Dairylea topping on an oatmeal base, what I ended up with was a slightly confused cheesecake. Now I like all of those things, and I can’t say it was unpleasant. It did make me think for quite a while, but unfortunately my final thought was ‘I’m not sure why they bothered’. 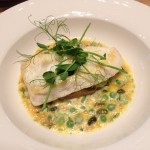 I did not have to wait too long for my main course, although it was just long enough to notice I’d been waiting, and there’s few things as annoying as waiting an extra couple of minutes to receive a piece of fish that is a couple of minutes over-cooked. I did mention this to my waitress who immediately offered to replace it, but it was nowhere near bad enough to send back, and not quite good enough to be happy with. It just seemed a bit unfair on the fish, and me, when I was already contending with the fact that ‘new potatoes’ meant ‘a new potato, sliced’. As the fish came with a very pleasant gratin sauce rich with peas, edamame and pistachio, the side of cauliflower cheese was probably overkill, but actually, lacked seasoning and the requisite cheesy oomph. The breadcrumb topping was lovely though, which I was just noting down when I breathed some of it in and spent the next two minutes choking attractively while my eyes streamed. This did at least mean I didn’t have to spend any longer looking at the big plastic tree in the middle of the room and again, wonder why they’d bothered.

Dessert was much more like it. I was told that the carrot and olive oil cake was a little dry (why have it on the menu then?) but the chilled lemongrass soup was highly, and rightly, recommended. An ice cream and coconut sorbet arrived with small pieces of melon, a glassy green tea wafer and baby mint leaves, and the soup was poured over (not by me I hasten to add, and I’m sure there was a drop left in the jug,) but it was exactly the kind of treat I’d been hoping for – delicate Asian flavours scrubbing the palate clean. My only criticism was the mint leaves, which tasted fantastic but made for a slightly unpleasant texture – perhaps shredding them might have made a quietly beautiful dessert perfect. 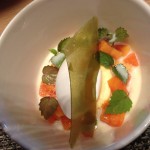 An excellent cappuccino rounded things off nicely, but also gave me pause for thought. If they could do something like the end of the meal so well, one has to wonder about the rest of it, and I’m afraid it does rather look as if Manchester is voting with its feet. Many of them are clearly heading towards The French and I for one am still very much up for the hike to L’Enclume, but at £45 for a booze free lunch with a non-optional (albeit thoroughly deserved) service charge tacked on, I suspect that Mr Cooper may be walking towards his own High Noon, which is a shame, because with a few tweaks I really get the feeling he could come out fighting.