This weekend saw me performing at the Komedia in Brighton, undoubtedly one of the best venues for non-arena filling comedians in Britain, if not the world. Brighton has always struck me as the place you go to retire if you have made an irreversible fashion error in your youth – a bizarre piercing perhaps, or a tattoo of dogs playing snooker. However, if you can excuse the ridiculously high percentage of white people with dreadlocks, not to mention the stags, hens and general drunkards of a sweltering July tourist weekend, the town remains a liberal delight. Especially if you actually go to Hove, where you’re less likely to get rollerbladed into.

I have tried to go for coffee or ice cream at Marrocco’s a number of times and heard great things, but have never been so committed that I was prepared to brave the inevitable queue that snakes outside from the chiller cabinets. On this occasion, however, I wanted lunch, and there was far more space in the cool, tidy restaurant at the back than there was out front. No one’s going to win any design awards here, but for food, value and service, you’d be hard pressed to do much better. Unless you’re the table behind us, whom I heard complaining about I’m not sure what, but who had clearly ordered pie and chips in a rather good Italian on a boilingly hot summers day, so have only themselves to blame.

We thought we were ordering a light lunch. Drinking only good coffee and tap water, we shared a Guazzetto di Pesce and the Antipasto Misto, which at only £10.95 was unlikely to leave us too bloated, we thought, wrongly.

I don’t speak Italian. I visited Rome for the first time earlier this year and loved it, but I couldn’t claim any expertise in anything Italian, except perhaps for Gallo socks, which I’m not going to mention again in case anyone asks how much I spent on them. I did know I was ordering fish soup, but I think I was vaguely expecting something more akin to a soupe de poissons (nope, don’t speak French either,) or bouillabaisse. What I got was an enormous pile of mussels, octopi, prawns, calamari and cherry tomatoes in an elegant pool of clear, buttery, garlicky broth. While I began making my way through this, garlic bread and bruschetta arrived. With garlic on it. I have to say, if you don’t like garlic, this probably isn’t the place for you, but then again, if you don’t like garlic, I’d probably advise you to go away and read something else.

Then the antipasto arrived. I’m not going to lie to you – I’m going to play pretty ignorant now, because I am. I could Google feverishly and make a moderately good stab at telling you what was on the plate, but sometimes ignorance is bliss. Suffice it to say, there was lots of it and it was delicious – I took a picture of it so you can see for yourselves. 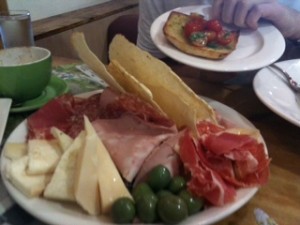 There were definitely sun dried tomatoes and Napoli salami. And about two other types of salami. And prosciutto. And that flat dry bread a bit like one half of a pitta crossed with a poppadom. And mortadello (? – the pink one with spots of fat and pistachios in it,) and some really lovely plain, sweet, thin cut ham. And those glowingly bright green olives that I can’t remember the name of either. And something totally delicious that I know I can’t pronounce, because I asked and I couldn’t, but was some sort of Calabrian salami which looked as though it was surrounded by fat which actually turned out to be provolone cheese. As an idea this is so thumpingly brilliant (and Italian) that I can’t believe I’d never heard of it before. There was parmesan and another hard cheese, I think pecorino – you could hear the crystals crunch between your teeth. There was a bit of lettuce underneath but we need not speak of that. We almost finished everything else.

Admittedly, we had not exactly stretched the kitchen. Antipasto could be filed under that category of cooking that could be called ‘arranging,’ but when things this good are arranged this well, you’ll get no complaints from me. The bill, including service came to a mere £27.39, and my only complaint was that I didn’t have space for an ice cream. Or a pie.