I bloody love Masterchef, and I have done ever since Gregg’s tiny vocabulary and John’s three facial expressions (twinkle, furrowed and semi-tearful) took over. I have predicted every winner, and with the possible and slightly shameful exception of the last series of The Apprentice, it is the only programme where I have watched every episode. I have some puritanical misgivings about the format changes in the last series, but generally speaking I even like the base. I like the buttery base. I like the buttery biscuit ba…oh, just look on YouTube.

I’d love to eat at Matt Follas’s The Wild Garlic in Dorset as I picked him as the winner on his first appearance when he tea-smoked a scallop (the only other one I did that with is James Nathan, who now cooks at Rick Stein’s Seafood Restaurant which I’ve already been to, and now prefer Paul Ainsworth’s No 6 when I’m in Padstow, thank you very much.) I recently saw the 2007 champ Steven Wallis at my bus stop, and having only spotted him helping in the background on Great British Menu in the past couple of years, felt a pang of sympathy that perhaps the Masterchef crown was not the passport to untold riches I thought it was, when he suddenly hailed a cab and was whisked off into the headily glamorous world I’m sure he now inhabits.

I am a man slightly obsessed, and the first winner I remember picking is Thomasina Miers, who now pops up all over the place and runs Wahaca, a Mexican Cantina in the world’s cheeriest basement in Covent Garden, but which has now expanded to four other branches across London. Everything’s so good I wanted something to go wrong just for the hell of it. We arrived at around six, with no reservation (they don’t take them, not that I knew that,) as we were going to watch professional bile spewer and alcoholic Doug Stanhope at the Leicester Square Theatre, so maybe it’s a good thing that we tempered the performance with such a positive hors d’oeuvre. One waitress happily showed us to our table, and then sunnily let us go and sit in another section where we were not quite sitting on top of other diners. It would seem they do pack them in, but then again, if you build it… Our new and equally cheerful waitress arrived and managed to pull off that difficult trick of enquiring if we’d ever been to a Mexican before by being helpful and informative without being remotely patronising, something I hear they have difficulty with at Harvester.

We were tempted by the Wahaca selection of street food, but with the weather the way it was (illegally hot) and the fact we’d walked into town, we both decided on salads. Obviously it would have been rude not to try a few little things first though, so we had a queso fundido – cactus, onion and melted cheese served with tiny tortillas, and a chicken tostada to start. The fundido were fun, but a little bland, while the tostadas were delicious. I know, because I ate them both. There are nice touches, such as unordered dipping sauces of varying chilli heat and the waitress circling your orders and writing her name in crayon on the menu, which would normally have me twitching Britishly, but felt just right here. I was yet again on water (in large part down to some recent appalling behaviour involving pitchers of Margarita, so this was really not the place to fall off that particular wagon) but we also had ‘citrus fizz,’ which looked impressive – with fresh mint and lime – but didn’t actually do a great deal for either of us citrusly or fizz-wise. 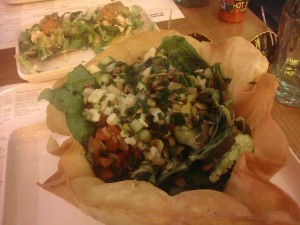 Both salads arrived in generous tortilla baskets; hers – tasty, chewy, char-grilled steak leaking juices through cos lettuce, spelt and pumpkin seeds, mine all zinging lime freshness over shrimp, scallop, avocado, mint and cucumber. Summer on a plate. I am no Mexican expert, but this felt both authentic and delicious. We even ordered extra guacamole (home made, obviously,) to finish the baskets with, and then I had to have a feta and broad bean quesadilla because the table two along had and I liked the look of them. They may have been no more than the Mexican equivalent of grilled cheese for the hardened veggie, but that didn’t mean they didn’t taste really, really good.

At £33.60 (excluding service,) we tottered out through the increasingly busy restaurant thoroughly sated and rather happy. As we left, lots of the staff seemed to be hugging each other. If I didn’t know better, I’d say we’d stumbled upon some sort of cult, but let’s face it, if it’s anything to do with Masterchef, I’m pretty much signed up already.