I wanted to review a restaurant in Mumbai, so I headed down to Phoenix Mall, another of those international monuments to Mammon that have sprung up all over the world as part of Cultural Learnings of America for Make Benefit Glorious Nations. I shouldn’t be too dismissive – it is also home to the Mumbai Comedy Store where I’ve been playing with John Moloney and Wayne Deakin to full houses of delightful and non-WKD swilling Indians. In addition, the whole place is refreshingly free of looters – it’s quite something when you feel safer in a city that has recently been shot up and bombed by gangs of fundamentalist commandos than you do at home.

The main reason I opted for Rajdhani is that I quite fancied trying some proper Indian food without risking my fragile western digestive system. I’m generally quite adventurous, but if you think I was going to conduct an in-depth survey of Mumbai street food in the name of arse-based suicide you’re reading the wrong blog. Come to think of it, you’re probably on the wrong bit of the internet.

Rajdhani is part of a chain – according to it’s website, it’s known as the ‘thali palace’ with 72 different rotating menus featuring 22,464 vegetarian delicacies from Gujarat and Rajasthan. Garfunkel’s it ain’t. It does, however, seem to be doing a thriving business and in common with much in this amazing city, is quite a hectic experience. There is no menu – as soon as we sat down, a waiter arrived with a jug of warm water for us to wash our hands, and then battle commenced. I tried to ask about a number of the dishes, but it’s quite hard to conduct a meaningful conversation with that many waiters travelling that quickly so what follows does involve a certain amount of guesswork.

The first things to arrive were the condiments familiar to anyone who likes poppadums (who doesn’t like poppadums?) – onion salad, mango pickle, green and red chutneys. There was also a small pile of sweetened powder I wasn’t sure what to do with, but whilst I was pondering this, dishes really began arriving thick and fast. 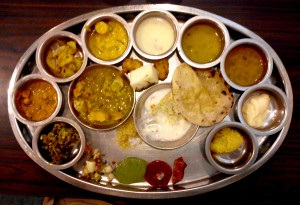 If you look at the accompanying picture, I will try and list what we had – possibly the surest way to show my complete lack of expertise. Clockwise from bottom left: okra with onion and herbs, vegetable curry, mustard seed potatoes, paneer curry, spiced curd, mild dhal, spicy dhal, fruit curd and some sort of sweet dumpling that Wayne liked and I didn’t. The larger bowl on the left is a dhal-ish type curry with some sort of broken biscuit, the one to the right another curd, with a savoury dumpling. I suspect dumpling is not an Indian word, but I’m doing my best here. As well as the chapatti and poppadums, there was a sweetened flat bread that reminded me of an American biscuit and a herb bread which may have been a phulka, but I was getting fairly confused by now. We weren’t given much choice about a somewhat uninspiring rice curry with a little added ghee, or the ‘cheesy bread pakoda,’ which, judging by the name, were probably aimed squarely at ignorant westerners who liked them very much indeed, thank you.

Almost all of this was very good – highlights included the pakodas, the paneer and vegetable curries, and the potatoes and okra. I also discovered that I like curd – especially the spiced (cinammon?) one that tasted like the white sauce they put on Christmas pudding at school should have done but never did. The fruit salad version was delicious too, as was a very sweet cake like creation sprinkled with nuts that I noted down as an ‘Indian brandy snap,’ despite its complete lack of brandy or snap, which also put paid to my inbuilt notion that I didn’t like Indian sweets because they were too, um…sweet. I could have done without the ‘welcome drink’ with a few shreds of undefined herb and something else (barley?) floating in it, but I could see how it worked with the rest of the thali.

‘Thali’ means ‘plate’ in Hindi, and we eventually had to ask the waiters to stop filling ours up before we burst. With a couple of cokes, the bill came to a whopping 798 Rupees, or a tenner, for two of us. Downstairs, Diesel were selling trainers for ten times that price which were probably made round the corner by someone who didn’t get that much to feed their family for a month. Thoughts like these are never far away in Mumbai, but in many ways that is also what makes it such a fascinating city to visit – maybe next time I should be a little braver and try the street vendors; if the food doesn’t kill you, the traffic almost certainly will.

I will be doing a benefit for a school for street children that we visited in Mumbai at The London Comedy Store on November 7th with both John, Wayne and a couple of people I can’t name yet but who could sell out the place ten times over by themselves. Further details to follow, but thought I’d mention it here first…