Well, not all of it, obviously. However, if I listed everywhere I ate over four days it would make the title of this post somewhat unwieldy and give extra publicity to Le Pain Quotidien in St. Pancras, where I drank some brown frothy milk that I can only think is a way of hurrying French people out of the country. Still, it can’t be any worse than making them leave from Waterloo.

Even people who don’t like France or the French (they’re called ‘bigots’) can find something to love in Paris. If you’ve not been, well, buy yourself a guidebook. I’m not going to do the full cultural tour, because this is Food Ponce, so you can only imagine how pleased I was by the name of the road in the picture above (look carefully.) I will say – I preferred the Musée d’Orsay to the Louvre, and I surprised myself by not being disappointed with the Mona Lisa. Do book online, as you get straight in, which is particularly handy if you don’t wish to queue around the glass pyramid, where the absence of rain is more than compensated for by a combination of fountains and gale force winds. The Pompidou Centre is worth a look both inside and out (this is a brilliant architectural joke) and the view from the top is worthy of the Eiffel Tower. Not that I’d know, because I didn’t go up the Eiffel Tower, but if you do, please pop in to Le Jules Verne and let me know if the scallops starter really is worth €62. Even in a city as expensive as Paris, that made the eyes pop out, as, I imagine, did the sight of Tom Cruise proposing to Katy Holmes in the same room, though for entirely different, libelous and unsubstantiated reasons. 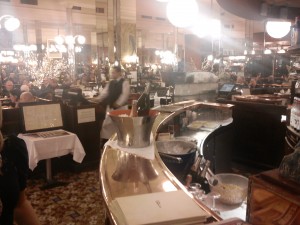 Our hotel was by the Arc de Triomphe, thus placing it firmly in the mythical Tourist Dining Exclusion Zone which gets mentioned so often by the guidebooks you’d think they were bringing back the guillotine for anyone tempted by an overpriced croque monsieur within spitting distance of the Champs Elysees. This led to that uneasy feeling that we were about to make a horrendous mistake in the culinary capital of the world. We’ve all been there – I’ve made catastrophic errors in my home town (never, ever, eat in Trattoria Da Aldo on Greek Street,) but generally I just go on instinct, which served us fairly well here as we walked past Les Gourmets Des Ternes about three times, arguing. It was when we got inside that things got amusing. As soon as we walked in, we were spotted (not difficult, we were only the second table to arrive) by Jean-Francois Marie, his open necked shirt and his white tuxedo. To give you an idea of of the man, it’s probably best just to look at the website, where there’s a video and 52 pages of photos of him with customers.

There are photos on the wall, there are tablecloths embossed with signatures and doodles from former celebrity diners, including Jack Nicholson and literally hundreds of people I’ve never heard of. I feel sure that despite my sub ZZZ non-celebrity status (I was once on Richard and Judy,) if he’d had the slightest inkling I’d ever been near a stage, bulbs would have started flashing, as he seemed like the kind of guy who wouldn’t just attend the opening of an envelope, he’d insist on hosting the after party too. Luckily, as we made it fairly clear we weren’t after his ‘amazing pepper steak’ he left us in the capable hands of a nice chap who looked disconcertingly like Despicable Me. We could have spent quite a lot of money had we wished, but instead simply went for a rather nice ‘fromage de tete’ – which you can order in France because it’s not called ‘brawn’ – then a serviceable cream of vegetable soup and a reasonably decent moutarde de lapin served with tagliatelle which came to €50 with a couple of glasses of wine. As we left, no one took our picture, which left us feeling as unremarkable as the food. Nonetheless, the place retains a distinctly Parisian feel, I’m sure there were a lot worse places in the vicinity (shouted the guidebook,) and I know Jean-Francois would feel he was worth the visit. 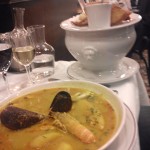 We stumbled upon a nice little tip for lunch the next day – the Café Des Officiers, about ten minutes walk from the Eiffel Tower, and therefore just outside that particular T.D.E.Z. I did go for the croque monsieur (you have to, at least once,) but what was really impressive was a special of onglet de boeuf with fettuccine, which was bloody (and) tasty. With a couple of coffees and water, the bill came to €35, which almost resembled a French bargain, so I marched off to look at a bit more art feeling terribly Parisian despite a slight tendency to murder the language at regular intervals. 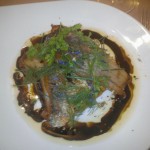 Dorade with endive and herbs

That night we opted for the first of our recommendations, from a friend who has a place in Paris so actually knows stuff. As you come out of the Gare du Nord, you will notice a garish red sign blaring the words Terminus Nord at you. Do not be put off. Once inside you’ll find a beautifully preserved Fin de Siècle brasserie, all glass, mirrors, linen and very…Gallic. Except for the staff, who were far more charming and helpful than stereotypes would suggest. In deference to my surroundings, I had what can only be described as the full French – snails, bouillabaisse and profiteroles with a glass of Sancerre. Snails are weird. No matter how much you try, you can’t get away from the simple fact that you would be unlikely to relish tucking into a plate of them unless they were absolutely drenched in garlic, butter and parsley, but they were, and I did. The bouillabaisse was big and hearty and served in a tureen that added to the fun, even if it lacked the complete oomph of the very best versions I’ve eaten. I’d heard the profiteroles were the best in Paris and they did not disappoint. Only three of them, but filled with an ice cream in which you could see the vanilla seeds and a chocolate sauce that was properly decadent. An onion soup opposite me was a meal in itself (apparently,) ‘gorgeous’ and ‘one of the richest things I’ve ever eaten,’ which is patently bollocks as she then went on to nick a profiterole. We spent €80 including service, and were so impressed we made time for coffee and croissants there on the morning we left. 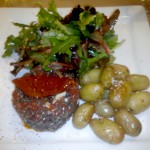 On our last evening we found ourselves at Les Fines Gueules, a tiny little 20 cover place in the cellar of a rather good looking bar just behind the Louvre and another recommendation. Unfortunately, the cold that I had been fighting off for the past few days turned up on the way there and utterly mugged my taste buds. I’d like to write an informed, and, I imagine, glowing review of the place as everyone was very nice and very helpful, and I could tell by the textures of what I was eating that I was in the presence of some very good cooking. Unfortunately, and excuse my French, I couldn’t taste a fucking thing. Speaking of which, don’t ever try to explain this to a waiter with limited English in your limited French whilst pointing at your nose – no one comes out of it looking good. A scallop ravioli in a saffron sauce looked and felt magnificent, but no, nothing – the same for a dorade with endive, fresh herbs and a balsamic reduction. I’m told they also tasted magnificent, but not as good as a tartare de boeuf enlivened with little shavings of pecorino. This was to have been the big culinary hoo-hah of the trip, but I’m afraid to say I even skipped dessert because it was, frankly, pointless to spend any more than the €85 we already had.

Luckily for me, I’d already had a wonderful time, a truly memorable meal at Terminus Nord and now I’ve got ‘a little place I know’ to visit, if only to find out if it’s as good as I think it is. Taking into account its location, I think we can safely assume the answer is a resounding yes, but I’m planning to go back, just to make sure.