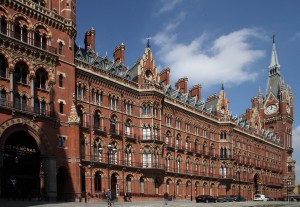 The façade of Sir George Gilbert Scott’s Midland Grand Hotel, or St Pancras to you and me, remains one of London’s most iconic buildings. I have always loved it, and place it alongside the Natural History Museum on my list of favourites, a stance that puts me worryingly close to Prince Charles in terms of architectural taste. In my defence, I am a fan of a great many carbuncles too, but there’s clearly something about twiddly Gothic Victoriana that just does it for me and Chaz, even if I don’t share his interest/belief in homeopathy, overpriced biscuitry or the divine right of kings.

The transformation of St Pancras into an international terminal has meant a complete overhaul of all aspects of the building, and while I have not been inside the hotel, I’m very glad to see the outside of it looking so well. The station also manages to look like the sort of thing you might be impressed by when arriving in a European capital, in that it is enormously shiny and contains multiple opportunities to part you further from your cash than the exchange rate already has. Apart from a disastrous coffee at Le Pain Quotidien on a trip to Paris, I hadn’t taken any of those opportunities, but an email from TopTable caught my eye as I was heading off to some wedding celebrations in North London, and it also coincided with the birthday of the friend I’d arranged to go with. The offer concerned two courses and a glass of ‘fizz’ for a mere £19 at the Searcys St Pancras Grand, so it seemed churlish not to take them up on it. 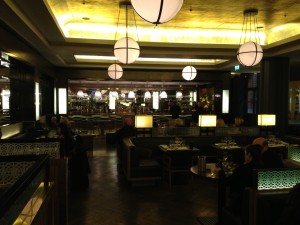 ‘Searcys St Pancras Grand is a stunning restaurant …situated opposite the elegant Searcys St Pancras Grand Champagne Bar on the Grand Terrace. Searcys St Pancras Grand is a stylish destination Brasserie…’ according to the website. That’s a lot of Grand-standing to live up to, and my levels of expectation were suitably elevated as I was shown to my seat in the admittedly rather impressive dining room, a convenient distance from the oyster bar where someone was singing jazz to a backing track as inoffensively as that is possible. I was reflecting on how little any of the options on the two course offer particularly appealed, when my companion arrived to point out how glad she was that we weren’t eating at the champagne bar outside as it was bloody freezing. As I was agreeing with this, she agreed with me about the set menu and we began that inevitable twitch towards the à la carte. 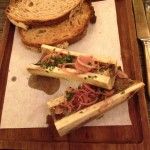 It’s worth pausing a moment to reflect on this – while £19 is undeniably good value, a choice of pumpkin soup, smoked mackerel or chicken liver pate for starters just seemed a little unimaginative, a position that didn’t improve greatly with the mains. Still, they had got us there, which was perhaps half the point, and so we proceeded to order rather more expensively. Half a dozen Colchester rock oysters at £15 while we thought about it seemed compulsory (it is an oyster bar after all) – these were very decent, even if I don’t see the point of mild Tabasco. We also agreed we should still have some fizz, and deciding that we (like most decent people) secretly preferred prosecco to champagne, scoured the wine list to find some. There wasn’t any, but the waitress assured it was available, which seems slightly strange. I don’t wish to appear mean, but I quite like to know the price of whatever it is I’m ordering. A very reasonable bottle of Jeio prosecco arrived which I later discovered to be a not hugely unreasonable £30. That is handy as it’s not an area I particularly like surprises in, but it might have been nice to know in advance. 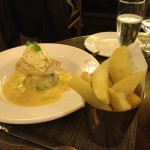 The starters weren’t bad, if still some way from Grand. A shellfish soup with brandy was a little thin and it was difficult to detect any alcohol – moderately tasty, but it would have benefited greatly from a little rouille and/or a crouton to stick it on. I went for the bone marrow on toast with parsley and shallot. Thanks to the genius of Fergus Henderson, this is a genuine classic (‘God’s butter’ – Anthony Bourdain,) so you’d better get it right, and they didn’t, quite. Don’t get me wrong, it was good, but a little over-sweetened with the shallot, with a distinct touch of lemon, ungenerously cut toast and a lack of the necessary oomph that scraping something from the inside of a shin bone would seem to require. 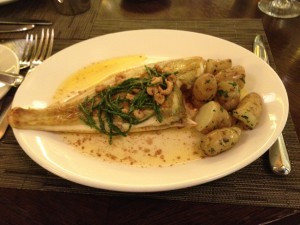 Mains were where the game was won and lost. Smoked haddock came with crushed potatoes, a relatively pokey mustard sauce and a perfectly poached egg, while my plaice with brown shrimps, samphire and unadvertised new potatoes was easily the best thing put in front of us all day. I mention the potatoes, because they might have been worth mentioning before I ordered a side dish of fat chips, especially when they arrived, pallid and undercooked and were sent straight back. I also had to ask for the spinach we had ordered, which was so over-salted it went back the kitchen too. As we didn’t want to appear more annoying than was necessary, we did ask them to taste it to prove we weren’t complete dicks. When someone comes back to your table and says “You’re right, we tried it, it was disgusting”, is it unreasonable to expect a little more than for the offending item to be removed from the bill? Bringing ‘disgusting’ to the table is pretty unforgivable, but instead we had to pay for our coffees, which included an espresso that had it been a train, would have got there very slowly, mainly due to flooding. What is it with coffee and St Pancras? 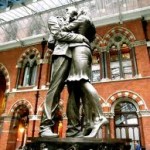 Reading this back, it sounds like we had a dreadful time. We didn’t. It was good to catch up with an old friend in sumptuous surroundings, and while there were obvious problems with the service, it was unfailingly courteous and polite. However, when you’re charging £115 for two courses at lunchtime, you cannot afford to get that many details wrong. As we left, we passed the enormous kitschy bronze of a couple that I don’t like (the bronze, not the couple; I’m sure they’re very nice.) Despite being at the wrong station, it is forever destined to be known as ‘The Brief Encounter Statue’ no matter how much its creator calls it ‘The Meeting Place’. I can see it is reaching for romantic Grandeur, but it doesn’t quite work for me, and the same can be said of the restaurant beside it, if not the building that houses them both.

As a result of tweeting this review to Searcys, I was contacted both by their head of marketing and the restaurant’s general manager, who not only apologised for the problems we had, but also very kindly offered me and a guest a free lunch. I knew there was such a thing. We had more oysters, razor clams with chorizo, scallops and monkfish scampi washed down with a couple of glasses of prosecco. And the spinach was excellent. Oh, and I was wrong about the new potatoes in my original review – they were advertised, so Searcys had every right to think I was a bit of a dick, but I’m very glad they didn’t. Well, at least they didn’t show it. I’m not going to give them another review, beyond saying I enjoyed my return trip enormously and thanking them for such a generous gesture – clearly my initial impression was wrong, and they really do know how to do customer service. I’m almost tempted to start giving out bad reviews more often, but that would be shockingly unprofessional of me. Next time I’m at St Pancras, I may well pop in to Searcys again, and now I can recommend that you do too.