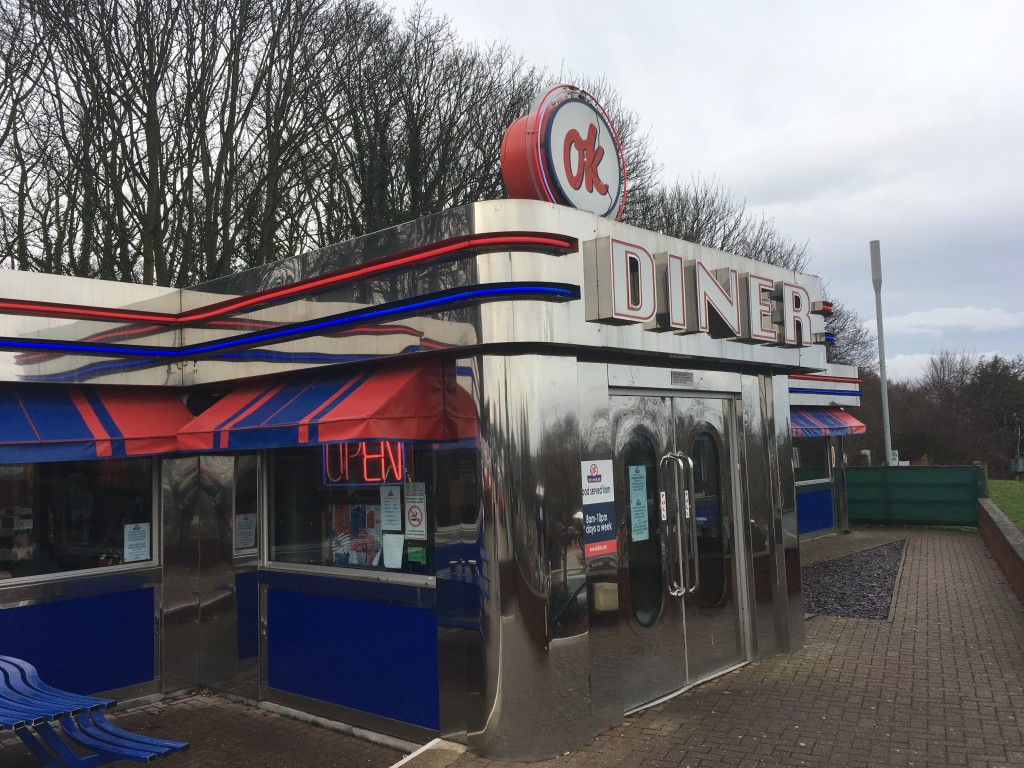 The life of the itinerant comedian is not always* a glamorous one. I think it was Bill Bailey who decided to take a break from the circuit when he realized he had a favourite service station. This will be a familiar sensation to any road warrior – a title a friend of mine laughingly bestows upon us as it sounds a lot better than Waze Guys or Costa Defectives.

You need only a passing acquaintance with Kerouac or Cash to be imbued with the romance of the road, but it is a different beast in the UK. Surrounded as we are by coast, any road trip longer than a day inevitably ends up rather damp. As a result, even the least experienced comedian soon knows our dear, benighted and presently very messed up country better than almost any other profession. Quite early in their career, he or she will have developed preferred routes, haunts and eateries. Many of these are burnt on our cerebellums in perpetuity, or would have been had Google Maps not surgically removed our ability to remember the simplest of directions a few years ago, in much the same way mobile phones robbed us of our memory for numbers the decade before.

My own personal speciality these days is the A1, a hilariously underdeveloped sibling to the M1, which is often quieter and and less given to pile ups and average speed checks than its closest relative. One of my favourite foibles of this resolutely unsexy road are the occasional Sex Shops which regularly pop up either side of it. I have no idea who gets turned on by endless miles of trunk road, but there is clearly a market for those who get to Peterborough and realize they’ve forgotten their butt plugs. There is another one just past Grantham in case you’ve forgotten anything twice, and should you leave your love eggs somewhere (or in someone) up North, there’s another on the southbound carriageway just before the A14. Which must be a relief.

There are also a number of branches of the OK Diner which appear from time to time, giving the entire road the feeling of a slightly tawdry, overlong and under illuminated Las Vegas strip. Sex shops and British diners. It’s half a surprise they don’t just rename it Route 69 and have done.

Now, I have a deep and abiding love for Americana, and America. As it goes through the torments and convulsions with Trump that are not so very different from our own with Brexit, I feel a very great sense of sorrow for the present state of a country I have lived, worked and studied in. I also have an enormous fondness for the diner, whether in the art of Hopper or Hollywood, or the endless cups of coffee I used to consume at Palookah’s in Wilkes-Barre PA, while listening to Lee Dorsey’s Yah-Yah on the table jukebox when I was 18 and lucky enough to be at High School there. I have always been tempted by the OK Diner experience, if only for the resolutely British lack of ambition in its name.

Which is, sadly, where the problem lies. There are many things we British do well, but aping the Americans is not one of them. One only need observe Wimpy, tuition fees or the ongoing inability of British TV to produce a decent nightly topical comedy show (I am still available, dammit,) to prove this. However, a combination of my own inexorable progress around the roadmap of the UK, and a free day during which I discovered the existence of an OK Diner round the corner from my Holiday Inn, just outside Chester, meant I had both the time, and the inclination, to see just how OK the OK experience was. If it was truly awful, at least I could blame the Welsh.

To be fair, while a concrete cluster of Subways, McDonalds, KFC and petrol availability does not scream ‘destination,’ the designers at OK Diner have stuck manfully to the task of furiously ignoring their locale. They have beefed up the décor with exactly the sort of prints and bric a brac that create the sensation of somewhere desperately trying to pretend it’s America whilst resolutely refusing to acknowledge it overlooks the A55. But hey, the welcome was warm, the music towards the acceptable side of the expected and there was a happy bustle around the place. I was plonked into a solo booth, handed a menu and brought some surprisingly pleasant filter coffee.

Health food, it ain’t, but then you knew that. The menu resembles Donald Trump’s bedside reading. You know where you’re at when the item below the All Day breakfast is entitled ‘The Bigger One’. But then again, it’s a diner – if you want quinoa and bircher muesli, you’re in the wrong place. At times like these, it is best to embrace the situation, which is why, despite considering the burritos, pancakes, burgers et al, I ended up ordering the ‘Homefry Hash’ – ‘New potatoes griddled with onions and red peppers served with our tender beef brisket in a sweet and tangy sauce topped with two fried eggs’ – on the basis that, if nothing else, it did at least contain a vegetable. I don’t count the potatoes or the onions, and admittedly I was daring the sauce to be dreadful.

And you know what? It wasn’t. Despite my worst fears, the sauce was neither over sweet nor too tangy – if anything, it was masked rather effectively by the eggs, and some properly cooked down, melting beef brisket that would put many a pop up street food stall to shame. This was genuinely tasty, filling, and a relative snip at £7.25. Throw in a really very good strawberry milkshake, a touch of Elvis and some delightful Welsh waitresses performing some sort of bizarre relay with the condiments until they collapsed into giggles and I couldn’t have been happier.

Hell, I even ordered dessert. Sadly that is where things went awry. I’m pretty sure their ‘Famous Original Cheesecake’ isn’t all that original. It might be famous, but only in the way, say, Ted Bundy is famous. This was a soggy-bottomed, loveless affair that screamed mass-production and stuck to the roof of your mouth in exactly the way you wished it wouldn’t. There are worse things to have stuck to the roof of your mouth than a baked vanilla cheesecake, but what elevated this to the unspeakable was the metallic crime against raspberries that came slathered upon it. A good raspberry sauce is a thing of beauty; this was a maroon atrocity that would make brake fluid feel good about itself. It looked very much as though the sweet tangy sauce I had feared on my main course had been sneakily smuggled on to my pudding as an afterthought in the vague hope I wouldn’t notice. As Monica’s mother once said of Rachel’s British Trifle with mince, it did not taste good.

Which is a shame really, because everything else did. I may have gone in without the greatest of expectations and a possible inclination to write an unpleasantly snobbish hatchet job. However, my bill for a hearty lunch came to a very reasonable £17.95 before service, which was exemplary. The nice ladies of the Chester OK Diner not only made me feel very welcome, they gave a delightful North Welsh slant on the big-hearted Diner waitress that is a staple of every Hollywood movie from The Wild One to Goodfellas. It was Americana via the A55, and you now what? It was OK. I mean, it’s not my favourite, but I left Elvis, and the building, in a very good mood and, as someone once said in another movie, I’ll be back.
January 2018