It’s rare that I prepare for a three course meal by snaffling my entire protein ration for the day before I’ve even sat down, but then again it’s even rarer for piping hot sausage rolls to start flirting with you from a bar top. Rarer still that they have a Scotch Egg friend who is waiting for you in the kitchen wearing nothing but curried mayonnaise, the saucy minx (ahem.) 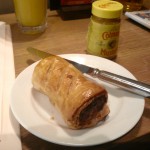 We hadn’t booked at Pub du Vin for Sunday lunch, but were looked after impeccably by very helpful staff who sat us on high stools with menus. In retrospect, it was remarkable that a table became available so quickly, as within minutes the whole place seemed full of prospective diners, but this was quite enough time for me to decide that I had to try one of those sausage rolls. This was, quite simply, a great decision. As Dickens is to Dan Brown so the Pub du Vin sausage roll is to Ginsters. Buttery yet utterly greaseproof pastry wrapped around a generous portion of beautifully seasoned, deliciously moist I-can’t-bring-myself-to-call-it-sausagemeat, helped along with the merest smear of Colman’s, but also perfect without, I’m sure. In fact this was so good that I had to try the Scotch Egg, which had also been recommended by a complete stranger at the bar. Although not in the same league as the sausage roll, the soft yolk and mayonnaise still made it a pretty darn exciting example of its oeuvre, which I desperately hope is as bad a pun as it’s trying to be. 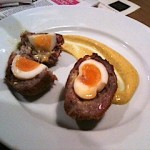 We were then sat in the bay window, eyed jealously by the empty Indian restaurant opposite. The room itself is light and airy, with photographs on the wall occupying that tasteful area just south of arty. I’m not a huge fan of the trompe l’oeil ‘brickwork peeping through’ paintjob; the place looks great – why make it look like your wallpaper’s peeling? I wasn’t keen on the mural in next door’s Hotel du Vin when I popped in there for coffee recently either, but this is not Art Ponce, so I digress.

The menu is refreshingly simple, with five or so starters and mains and three specials chalked on the wall. We shared a pea, broad bean and goat’s cheese salad which was delightful – sun dried tomatoes and curdy cheese giving it a real punch, balanced by the freshness of the greener ingredients.

The only real problems came with the mains. My lobster bisque (one of the specials) had to go back as it was lukewarm at best, so by the time we had worked out that the roast beef was also a little on the tepid side we felt it was a bit late to send that back too. The staff did, however, deal very efficiently with the problem – the fact I had to ask for another spoon when the replacement bisque arrived meant that it also came with a free glass of a very good New World Pinot Grigio, which was appreciated. The bisque was superb – melting salmon, red mullet and a large shell-on prawn in a velvety, rich soup with none of that slight tinniness that normally stops me ordering it. I also made the unusual discovery that if you want to mop your plate, bread is for losers – steal some Yorkshire pudding and you will be rewarded with a kind of lobster choux bun that is as delicious as it is surprising. The roast – temperature to one side – was a little light on the veg, but the beef was excellent and as rare as we were told it would be. Like a flirty sausage roll. 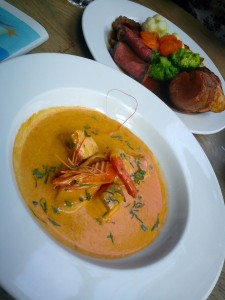 I shouldn’t really have had pudding, but I feel it is my duty to try every crème brulee that is offered to me, martyr that I am. This was up there with the sausage roll – smooth custard delicately (and not over-) flavoured with vanilla, topped with exactly the right amount of caramelized sugar to shatter pleasingly under the spoon without over sweetening what lay beneath. One of the best I’ve ever tasted, and there have been a few.

The bill came in at a very reasonable £53.10, service excluded. I’d actually forgotten the sensation of being able to reward service on my own terms; something I value as both a former waiter and a sentient human being. What marks good service out is how they respond when things go wrong, as opposed to when they’re going right, which they did for the vast majority of our meal. I truly dislike the term ‘optional service charge’ when it is clearly anything but. Pub du Vin doesn’t have an optional service charge because it doesn’t need one. And you can’t say rarer than that.