Ah, Nottingham. Bows and arrows, merry men and medieval taverns, or gun crime, stag nights and binge drinking, if you want to be a bit more twenty first century about it. And comedy clubs – three new ones in the last year – clearly designed to distract the townspeople from arguing about which of their pubbes is the most olde. I was at The Glee for the weekend with Ian Moore, Nick Doody and John Fothergill, who I’m very lucky to count as good friends as well as great comics. (This being Nottingham I should probably call them jesters, but I do have some rules.)

On Saturday, I wandered into the Lace Market to follow my normal routine – stare longingly at the windows of watch shops and then try on lots of clothes I can’t afford. Luckily, Flannels didn’t have a Holland Esquire jacket I wanted (at least not in the right size) so this freed up a bit of extra cash for lunch. It is thought processes like these that will see us out of the recession.

The first thing I noticed about Iberico was how close it was to a La Tasca. Now I’ve only eaten in one of these once and it wasn’t completely awful, but I’m pretty sure the proprieters of the Nottingham branch were less than thrilled when Iberico opened its doors round the corner. In football terms, this is a bit like Notts Forest finding they have to play Barcelona every day, although that analogy doesn’t work completely as Forest have had some success in Europe, which is more than you can say for La Tasca.

Iberica is located in the ‘historic’ Galleries of Justice. If that sounds a bit…Inquistiony for you, rest assured – it has nothing on the sacrilege that is The Pitcher and Piano in the church next door – but it does have something of the dungeon feel to it. It was going to be pretty difficult to import Spanish weather to the Midlands anyway, let alone into a gothic basement, so Iberico has done the next best thing and imported some quite wonderful ingredients instead. The lunch special – two tapas, Catalan bread and dessert for a very reasonable £11.95 – is only available Monday to Friday, but this didn’t bother me as I was getting quite excited just reading the menu and am clinically incapable of choosing only two tapas dishes anyway. Fresh sourdough arrived to help me think, with olive oil and balsamic vinegar so sticky it even stuck to the bread properly. 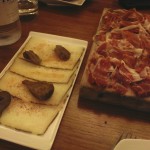 We started with ham because you have to. I managed not to order the most expensive, settling for the Paleta Iberico de Bolleta D.O (still £13.95,) alongside some aged Manchego with sweet pickled figs and smoked paprika. Everyone knows all about black pigs and acorns by now. All I’ll say is that if I was on death row, I think there’s a good chance I’d order charcuterie for my last meal  – obviously I aim to get executed at a very high end place. There’s something almost forbidden about really good cured ham that does strange things to me, and with the cheese and figs I was already making the weird appreciative noises that I may have mentioned in previous posts. Meanwhile, Catalan bread – a kind of Spanish bruschetta on lightly fried bread with tomatoes, garlic and herbs – had my taste buds telling my arteries to be quiet. 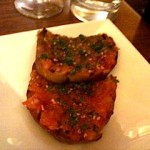 They (the arteries) were in for a fairly rough ride. Next up, two courgette flowers stuffed with Monte Neblo goat’s cheese in a crispy batter and drizzled with honey. The person sat opposite me said something about things being too rich and sweet at this point, so I think we can discount her opinions. Patatas bravas, triple cooked in goose fat, were a perfect example of a dish that is often done badly because it should be easy to get right, while Truffled Onglet beef was so rich it should probably have gone back to Spain to prop up the economy. Luckily the addition of broad beans and pickled shimeji mushrooms pegged it back to the merely wealthy. 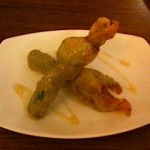 Ensaladilla Rusa – seared tuna with tomato and soft quails eggs – was all kinds of things, but mostly very clever and very delicious. The person opposite me doesn’t like soft egg yolks, so we shall continue to ignore her, although we did both agree that the one slight disappointment was the lime, salt and pepper squid. Small pieces of squid with a bit too much batter and not quite enough lime or alioli to prevent them being a little dry – they definitely suffered by comparison with the enormously high standard of everything else. 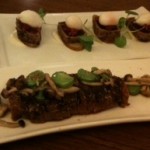 I don’t really think of dessert when I have tapas, and in any case, by this point the arteries had had a word with the stomach and they’d both agreed they were full. The bill, with exemplary service, water and a very nice glass of white Rioja, came to £73.76. For what was essentially a treat, I think that represents pretty good value, and as most of the comedy circuit is now spending more time in Nottingham than it used to, I‘m sure I will be treating myself again. Next time I should probably try La Tasca, but after this, I doubt I would do them justice. I’ll be too busy sitting in the Galleries.