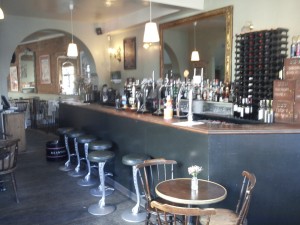 My friend Philippa and I have shared many things over the years – flats, holidays, Blackadder fandom bordering on the obsessive, a comedy club (she ran it, I just turned up occasionally) and a love of good food and drink. Together we have darkened the doors of The Savoy Grill, The Seafood Restaurant, Lower Slaughter Manor, Seabar and others too numerous to mention, or in many cases, remember. L’Escargot is certainly a bit of a blur for Phil, although that was thanks to the combination of a highly polished floor and heels rather than the (very good) wine list. While sharing a lovely Sunday lunch at José after she had run a half marathon for the Tall Ships Trust, in memory of a friend who is no longer with us (see previous post,) I had also promised to help her move house. Though not quite a gargantuan effort to move her drinks cabinet six inches closer to Berlin, this did entail moving most of her possessions a good two hundred and fifty yards across Peckham Rye and, of course, lunch. 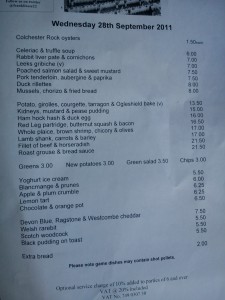 We were, frankly, gobsmacked by how good it was. I hate to ruin the suspense, but Franklin’s is a wonderful place. I have become slightly worried that Food Ponce is becoming one ringing endorsement after another, so for the sake of balance, I might point out that while the food in the Fox and Grapes in Wimbledon isn’t bad, £47 for a pub lunch for two with no booze is taking the f**king piss, which is why it’s not getting a full review, even if Claude Bosi is in charge. Franklin’s, on the other hand, gets my undivided attention.

Although it advertises itself as a restaurant, there is a pubby feeling as you walk into the bright and airy bar, which is no bad thing (there is more formal seating in the back, and a function room downstairs.) I was immediately impressed by the selection of beers on tap – a couple each of good lagers, bitters and ciders, a local pale ale and a Guinness. Who could need more? Well, we could actually, as I was driving, and so ginger cordial was procured from their farmshop next door (I know, you’ll like this place) and Phil made a couple of minor forays into a wine list that was clearly selected with the same good taste as the beers. 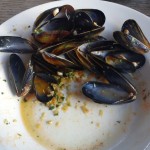 We shared half a dozen Colchester oysters to start, with a pickled onion vinaigrette that was a nice change from the routine shallot version, and prevented us from making any inroads into a rather interesting selection of bar snacks while we ordered the rest of our meal. I had the lunch special at £16.95 for three courses, although this did involve a sneaky pudding exchange for which I think we were forgiven. Phil started with a very tasty pork tenderloin with aubergine and paprika – although the meat was a little dry, which was our only criticism of the entire meal. My mussels with chorizo were plump, juicy and lifted to something completely other by the addition of small chunks of fried bread. I ended up drinking the broth straight from the bowl because sometimes you have to. 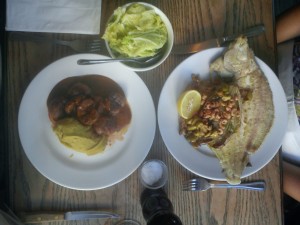 I think I fell properly in love when my kidneys arrived. I did take a picture of them on their own, but haven’t included it as their triumph is not an aesthetic one. Beautifully earthy kidneys in a rich mustard sauce accompanied by a pease pudding full of bacon bits. Something even better appeared to be happening across the table – Phil’s whole plaice with brown shrimps, chicory and olives was a thing of beauty, all its constituent elements marrying in a way that would make a Mormon jump for joy, if they’re allowed to do that sort of thing. Perfectly cooked fish, salty shrimps and a little char from the chicory all cut through by the slightly acid tang of the olives. Absolutely stunning. I’d moved on to a raspberry spritzer by now because I know how to live, and the bell from the kitchen when a dish was ready was making me salivate like one of Pavlov’s dogs. Reading this back, I realize I must be a delightful dining companion.

The desserts were well worth a dribble too. My lemon tart was a great big citric smack, although because I have been watching the Great British Bake Off I was about to comment on how, if I was being super-picky, the bake had not quite made it to the very centre of the pastry base when Philippa quite rightly shut me up with a spoonful of chocolate and orange pot. With a little cream sloshing about on top of it, we were not originally sure we had got the right dessert, but hidden underneath was ‘possibly the densest thing I’ve ever eaten. In a really good way,’ and I had to agree, even if I prefer her description of José’s meatballs from a literary point of view. 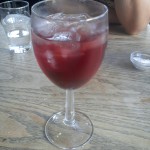 We finished with coffees and a small Armagnac for her as the sun of a ridiculous Indian summer filtered in through the windows and convinced us that for once, everything was well with the world. Old friends and new discoveries – even the music was good. As our bill arrived with the same friendly and unhurried efficiency as everything else we had asked for, I seriously considered popping along for the Rugby World Cup breakfast offered at the weekend, but decided East Dulwich was a little too far to travel that early in the morning. More importantly, I would hate to associate Franklin’s with any kind of disappointment.