So. It’s a big day. Let’s say momentous. I’m not that bothered, frankly, as I think most right minded people aren’t, but there are certain signposts in your life, and I’m now probably beyond the halfway point when it comes to ticking them off. This, in fact, taking into account modern life expectancy and David Cameron’s insistence on raising the retirement age until we’re all dead, may well have been the halfway point, so what do you do on your 40th?

A martini, as opposed to, say, the deposit on a small flat.

Well, if you’re my girlfriend, you manage the impossible and book a table at the newly crowned best restaurant in the country for lunch. And then they confirm by email and so do you. And then they phone you to confirm that you’ve confirmed. And so on. And then you turn up a little before twelve because they’ve insisted that you have to. And because you’ve been waiting for this, you’re quite excited, and you order a martini when someone deigns to come to take your order. A lovely Tanqueray 10 martini that you later find out costs twenty-three quid. I know. But you don’t know that, because you are in the bar, waiting to go into the best restaurant in the country.

“Are you sure you have made a reservation at the best restaurant in the country?” (OK, I may have slightly made that one up,)

And the perennial favourite,

“What was the name?” (this one I didn’t, but they did ask it a number of times, just to make sure I got it.)

In retrospect (I had a lovely birthday, by the way, thanks for asking) my favourite bit of the meal was my girlfriend thrusting her iPhone at a member of staff to show her their confirmation email. Steve Jobs did not die in vain. 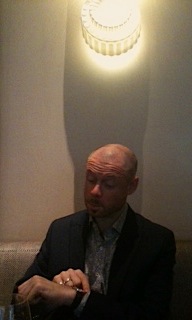 Under a jelly mould, a man discovers some sort of primitive timekeeping device. The only other one in the building is being used to cook pineapples.

I was still excited. I was in the best restaurant in the country, and I could see the pineapples turning on their special Swiss-made turny thing. And Meat Fruit kept on running past me looking like it could do with more toast, sorry, grilled bread. You’re definitely in a destination establishment when you know half the menu because you read the papers.

To be fair, in most other respects, the best restaurant in the country was marvellous. The staff were delightful and my only real complaint was that you had to either go for the house wine (a mere £20) or remortgage. The house wine was very adequate, and could nearly have made a whole martini. 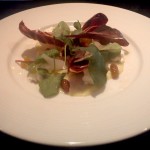 We decided to go for the set lunch at an almost martiniesque (do I stop now?)  £28 for three courses. My pig’s ear ragoo (I’m unclear about the spelling, also, but that’s how they did it,) was rich and tasty, if a little bit unsurprising. Her lemon salad on the other hand, with goat’s cheese curds, was exactly the sort of thing I’d been hoping for, so we swapped, which was her idea. Intricate tastes. That’s how I’m going to describe it – stunningly simple, and yet terribly complex and delicious. Apparently curds are very now.

For mains, the cured salmon was cooked on one side, what they did with beetroot astounded and, oh, it’s too difficult to explain, but it was lovely. My Bath Chaps were also lovely, as Bath chaps tend to be (Kingswood School ’82-’89, I thank you,) with a lardo topping that was much nicer and cleverer than a protein membrane has any right to be. We also had triple cooked chips that were, frankly, chips. I had been led to expect miracles, but that is probably media hype rather than Heston Blumenthal’s fault. There is so much hype around Heston I sometimes wonder if Quaker Oats think they have made a mistake not putting snails in their cereal boxes. 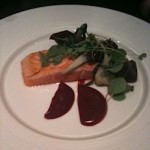 Cured salmon with beetroot and chard

Where Dinner really got me was dessert, which is unusual. Her Raspberry Loaf was a genuine delight, but my Chocolate Wine was something else. All that stuff I wrote about Franklin’s chocolate pot? Forget that. (Really, don’t – it’s amazing, and they’re nice to you.) The wine itself I could probably do without – it was perfectly interesting, but the chocolate tart was the star – the sort of thing that would have Belgians weeping and doing bad things to the Congo. Utterly divine, and I mean that to be as camp as it sounds.

We finished with coffee and a bill of £125. I’m really glad I went and I’m enormously thankful to my girlfriend for managing to organise the experience, because the place is booked solid. Would I recommend you go? I’m not sure. Of course, if you want to say you’ve been. Amazing food and a lovely view of Hyde Park. The clientele still made it feel a little like a hotel restaurant, which, after all, is what it is. I would have loved to place a few of the One Hyde Park residents on the Swiss turny thing alongside all the other pineapples, but the point is, I was made to feel enormously unwelcome when I was doing something that should have been a big deal. If you’re going to be a big deal, don’t fuck up other people’s. 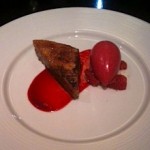 In the evening, we went to Mien Tay with some of the finest people known to humanity. Turns out, it’s one of the best restaurants in the country. It cost about a martini each. I had goat, which was a surprise, because I thought the Mandarin Oriental bar staff had already got mine.