Being the young, thrusting, savvy-type comedian I am, my life is an endless whirl of meetings, projects and pow-wows, and the sight of me bustling into a restaurant with important files, lap-tops, iPads and armies of assistants to bark at as I bash heads with top corporate and broadcasting bods is a familiar one to the Maître d’s of all the major London eateries. I have The Ivy on speed dial, San Lorenzo in my pocket and Le Caprice on hold. That’s just the way life is for someone who this weekend can be seen at two (count ‘em) separate gigs in Leeds, ON THE SAME NIGHT.

Now, the more astute amongst you will have noticed that the above paragraph is a tissue of lies (apart from the bit about Leeds – I am ON FIRE up here,) but I did have a meeting recently with an actual producer who works for a proper broadcaster and everything. I did this mainly so I could write this review from the point of view of Ronnie Corbett (“as I said to the producer…”) although taking into account that he passed out in a restaurant a few days ago, this was perhaps not such a brilliant idea. (Don’t worry Ronnie, it’s called ‘Chinese restaurant syndrome’ and often happens when people of advanced years eat more than they’re used to. My dad tells a story about it happening to both of my grandparents at the same time – he’s a doctor and he thought they were dead. They weren’t.)

The meeting was intended to be a chat about my continued inability to make any headway onto the nation’s airwaves (something I am very good at) and on that level, was quite a success (we both agreed that I had made very little headway onto the nation’s airwaves.) However, the producer in question also happens to be a lovely chap who has actually done what he can to redress that situation, as well as a proper comedy fan, so what we really did was gossip for an hour which was a lot more fun for all concerned. In the interests of appearing businesslike, however, I had asked a friend for any tips on a suitable venue and she had recommended Verru. 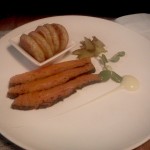 Now, perhaps the idea of Scandinavian food cooked by an Estonian may not ring everyone’s bell, but I’ve been to Tallinn and loved it and everything Scandinavian is so hot right now it hurts. Although a lot of it is cold, obviously. This wasn’t perhaps the place for foraged brambles and sea buckthorne (I’m not sure I’d want to eat at a place that foraged heavily in the Marylebone area) but from what we had, I’m sure they’d make pretty good fist of it if you asked them to. Verru is building quite a reputation, which given it’s 26 covers meant I had the choice of the two remaining tables, and opted for the one not actually in the till, but on a comfortable green leather banquette between a couple of tables of men in suits spending other people’s money. It’s a properly handsome place in an understated way, and the Maître d’ was charming and looked about twelve, as I’d been told he would, and gave me some quite stunning garlic bread, which I hadn’t. This was not your buttery, Britain thinks it’s France in the 70’s type affair, but beautifully fresh bread with the cloves baked through it; if garlic bread really is the future, then this is it.

On the evidence of the à la carte, this is definitely a place that I want to come back to and spend some proper money, but, as I said to the producer, the lunch special at £12.95 for two courses looked particularly inviting (and I wonder why I’m not more successful.) This was clean and deceptively simple cooking, which also had the added benefit of being delicious and so healthy I felt like finding a fjord to chuck myself in afterwards. An exemplary plate of home cured gravadlax, with blinis and pickled cucumber was deemed a great success, whilst my skandi fish soup was delicious – precisely chopped baby vegetables and delicately poached white fish swimming (not literally) in a clear broth that had taken all the attendant flavours and put on something of a party for my mouth. Not a wild party, admittedly, but some kind of sophisticated soiree, which is much more the sort of thing I’m interested in these days. 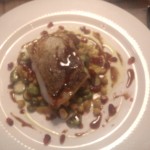 A terrible photo of a great pollack dish

A good entrecote steak was perfectly cooked, as advertised, which did strike me as a little odd – I’m yet to see a restaurant offering imperfect cooking, though I’ve eaten in plenty. It was perhaps not overly Baltic, but the nettle and herb sauce took care of that, and came with some chips that I have to say are the best I’ve eaten in London. Heston can triple fry all he likes, but these weirdly cylindrical things had been finished off in some form of flying animal fat and as a result, frankly pissed all over the Dinner version down the road. Not an image I’m hugely proud of, but a truthful one nevertheless. My pollack was a more complex affair, with more chopped baby vegetables alongside chickpeas, chorizo and pomegranate all happily singing from the same song sheet. My taste buds were getting quite into the swing of things by now, and the fjord was definitely starting to beckon.

Having put the comedy world to rights between us, a couple of coffees and a bill for just over £40 added to the general feeling of well being. Rather like the British public and my broadcasting talents, I have a distinct feeling that in terms of Verru’s potential, we had only seen the tip of the iceberg, but this is a perfect place for either a business lunch or something a little more sociable. Luckily, as I said to the producer, I thought we’d managed to combine the two rather nicely. Which is probably just shorthand for saying I’d nicked his chips.