There’s nothing to get a comedian’s blood pumping like Glasgow. Legendary tales of Empire death and epic failure abound, and when you’re being compered by the effortlessly brilliant (and very Scottish) Joe Heenan and following local tornado Janey Godley, you’d better be bringing your ‘A’ game. Joe’s Sherlock Holmes routine is the best new thing I’ve heard on the circuit in a while, and Janey is such an astonishing fount of stories the crowd never want her to leave. So, when you walk on and everyone hears ‘Glas-go’ and not ‘-gie’, there is a perceptible sigh of disappointment, rapidly followed by an almost audible audience thought balloon that says, “This had better be fuckin’ good”. And that is when you earn your money. It says much for the generosity of the Glaswegian audience and the brilliance of The Stand as a venue that I was able to have such lovely gigs this weekend, but I’d be lying if I said my heart didn’t beat that little bit quicker on the way to the microphone. 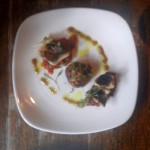 Rightly or wrongly I’ve always felt something of a connection with Glasgow (though luckily not the type that results in thinking I should wear a kilt at weddings.) My grandfather was born here and my Great Aunt Chrissie lived to the ripe old age of 104 in a small flat just behind Partick station – her motto: “If you can’t laugh, what can you do?” – and I have yet to come across a more infectious giggle in all the world. Unfortunately, I didn’t see a great deal of the city on this visit as much my time was spent hunched over a keyboard, but I did have a couple of restaurant recommendations to alleviate the typing, which I then summarily ignored as it turned out a very old friend was in town with her partner. She insisted we went to Stravaigin, and as she lived here for ten years, and tends to get her own way, I happily agreed.

I arrived first – unfortunately the restaurant was booked for a wedding reception, but it says much for the quality of what was to follow that someone wanted to celebrate their nuptials in a room adjoining a bar full of people nursing varying levels of Saturday hangovers. We sat on high stools until a table became available, and then we set about the menu. The staff were attentive and helpful throughout, especially when I changed my starter from mussels having discovered boudin of pike was one of the specials. I had seriously considered the pannacotta of parsley root, which was the stand out oddity on offer, but rejected it on the grounds that I’m a blogger, not an explorer, and the idea of a milk pudding on a stomach that had had one more Guinness than was strictly necessary the night before simply didn’t appeal. 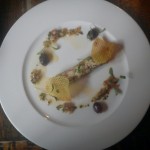 The pike was beautiful – not really a boudin in the strict sense of the word, but probably served like that to make sure this famously bony fish wasn’t. Combined with booze-soused grapes, homemade lattice crisps and a nicely tart sauce vierge, this was a highly imaginative combination of tastes and textures. Similarly, a pork cheek and kimchee starter was a delightfully rich reminder of why cheekiness can be a wonderful thing, and a tamarind glazed sea bass with crab and sweet potato cake was both deceptively subtle and very tasty. 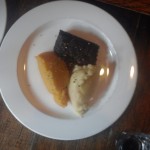 According to the menu, ‘stravaig’ is an old Scots word meaning ‘to wander aimlessly with intent’, which as well as being a perfect metaphor for my career, is also a fair description of the main courses on offer. I was sorely tempted by a wonderful looking nasi goreng with poached egg to banish the last of those Guinness cobwebs, but then I spotted the guinea fowl Kiev with potato rosti. Often a dry meat, this lent itself spectacularly to the garlic butter treatment, and even if the rosti was inevitably a slight touch on the greasy side, it was topped with red cabbage that even I managed to enjoy. Now that really is saying something. Another pork cheek was happily being stuffed into someone else’s opposite me, as was one of the best haggis, neeps and tatties I have ever tasted. Apparently Stravaigin’s sister (or should that be mother) restaurant, the much venerated Ubiquitous Chip, does a venison version, which means I shall be wandering towards it on my next visit – not aimlessly, but very much with intent. 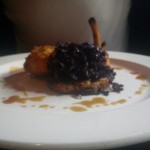 When recommending the restaurant, my friend had used the deceptively simple argument ‘because I love it’, and with the arrival of desserts it was even easier to see why. My coconut pannacotta (I succumbed in the end) was the perfect wobble, with a shredded mango and chilli salad and quite brilliant kaffir lime and lemongrass arancini. The combination of flavours with the added texture of the rice balls lifted this pudding seamlessly into the realms of the very special indeed. An olive oil cake with pistachio sabayon and coffee mascarpone was a similarly stunning balancing act, and a sticky toffee pudding was sticky and toffee and pudding. Who could ask for more? Well, we could – espressos, a grappa and a Laphroaig as it happens. I stayed off the booze as I had one eye on the evening ahead, but when the biggest complaint of an entire meal is that the coffees arrived before the desserts, you generally know you’re on to a good thing. It almost feels churlish to mention it now, as if I’m berating the staff for being too efficient. 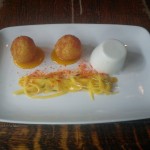 The bill came to an astonishingly reasonable £100, and we threw an extra £15 on top for service as we had been very well taken care of. That’s the thing about Glasgow, as every comedian knows – it can take care of you in more ways than one, and I, for one, cannot wait to Stravaig it’s way again.