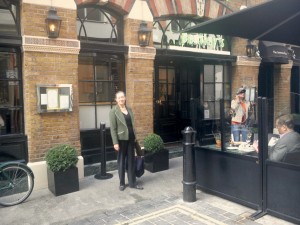 Bentley’s. And my mum.

I have been looking forward to this meal for years. Richard Corrigan is a titan in the pseudo-foodie world of Great British Menu and Saturday Kitchen that many of us inhabit in preference to doing much actual cooking, and when he bought Bentley’s in 2005, I was suitably excited. He first bounced onto our screens a decade ago with more than a touch of Irish charm, and a boundless enthusiasm for food that was reflected in his figure as much as his cooking. Recently, he appears to have cultivated a slightly sterner image – the strict schoolmaster with a twinkle in his eye whom students are a little scared of, which only makes them love him more. I once had a superb meal at his first restaurant, Lindsay House, and the idea of him in charge of a full on, not to say legendary, seafood restaurant made me want to at least base an affectionate black and white film on him, or perhaps more plausibly, eat there immediately. 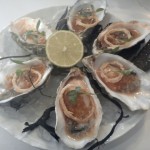 The main thing stopping me was that I had a deal with my mum, who loves seafood. I love seafood, but I was unaware of this until my late teens as my father is allergic to it. Sometimes I think he’s just not trying, but then he goes pink and puffy and threatens to throw up, which tends to close the argument. In some sort of unconscious display of filial support, I decided in about 1974 that I didn’t like fish, and believed it until someone made me eat a trout in 1990. As the only thing that has made my dad go a stranger colour than fish was me getting my ear pierced in 1988, there has never been any cooked at home. This does mean my mum rarely gets to eat one of her favourite things, so we made a deal a few years back that we would go to Bentley’s together on one of her visits to London. Freud would have a field day in our house. 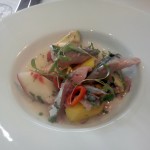 Bentley’s originally opened its doors in 1916, and the weight of history does seem to hang fairly heavily upon you as you walk in. We were taken past the seriously magnificent marble oyster bar and upstairs to one of the rooms where William Morris was clearly the only designer pitching for wallpaper. This is one of those restaurants where the pecking order of waiting staff is more clearly delineated than in any military unit, but they were all smiling, helpful and ruthlessly efficient, which is where we encountered our first problem. I like sparkling water with my meal, what I don’t like is someone re-filling my glass after every single sip. After the third time, we asked the waiter to stop it. Then we asked the next waiter to stop it as we were very much enjoying the cheesy wafery things with anchovies through them, (stop me if I’m getting too technical,) not to mention a very good selection of breads including one that might just as well have been called cake.

The menu is exciting – there’s no other word for it. Not in a ‘molecular gastronomy WTF is that’ sense, but in an ‘OMG I really want to eat that’ way (apologies to grammatical purists, but I’m trying to pull us out of 1916 here.) There is a fantastic selection of oysters and crustacea, with starters mostly hovering around the £15 mark, to which you can add at least another tenner for mains. I would have loved the shellfish platter but it was £66 per person, and this was lunch, so we were a little more conservative. 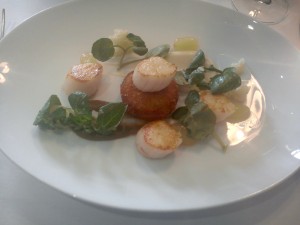 Or so we thought. I have to report that ‘Vietnamese Oysters’ are one of the most astonishing things I have ever put in my mouth. Served on ice with half a lime, a paste of lemongrass and ginger (but strangely no chilli) and topped with a tiny onion ring for texture, these reminded me of my first ever oyster, but with a lime burst of flavour that I can only describe as unique. In a very, very, good way. Mum began with a pretty mackerel ceviche with a perfect citrus kick. Chefs everywhere must be punching the air at the present popularity of this abundant, cheap and tasty fish, and to be fair, it returns the favour by punching right back. The only disappointment was having to ask a third waiter to leave our water alone. I know there’s a hierarchy, but surely they’re allowed to talk to each other? 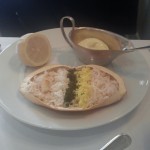 For mains, I opted for scallops on crubeen (pig’s trotter meat, breadcrumbed and deep fried) with a raisin and caper sauce and cauliflower puree. This was brilliant cooking, combining tastes and textures to stunning effect, with watercress adding a little extra zip, but £26.50 still felt like a hell of a lot for four smallish scallops, and a side dish of slightly tired buttered spinach didn’t really bridge the gap. My mother fared better as she had decided to order a second starter; her dressed crab was perfect and everything you would expect – if it hadn’t been, it would have been time to call the waiter over, but we couldn’t do that as mum had bet me sixpence that one of them would try to top our water up again before the end of the meal. 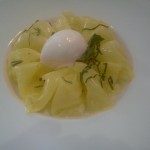 We decided to finish with a shared carpaccio of pineapple that arrived with a scoop of lime sorbet and a little fresh mint, just as we realized the room around us had magically filled with expense accounts. While I cannot fault the dessert, or blame the restaurant, there is something peculiarly soulless in realizing that almost no one else around you is actually paying for their meals, but then at these prices, I am hardly surprised. It is probably also what allows the restaurant to get away with the ever-infuriating cover charge. I often think if you’re going to charge me £2 simply for sitting down in your restaurant, then I probably just won’t.

I thoroughly enjoyed the meal, but my biggest disappointment is that it wasn’t quite the reflection of Richard Corrigan I had been hoping for. While the food, unsurprisingly, was excellent, there was a lack of joie de vivre in the whole experience that I’m sure is unintended and certainly not a facet of the proprietor’s personality or his approach to feeding people. Of course, we all know that the main reason I won’t be rushing back is that I don’t have an expense account, an income equivalent to the GDP of a developing nation or a tax avoidance scheme in place à la Carr. We had hardly over indulged, and yet our bill, including a 250ml carafe(tte) of Muscadet still came to £115. Unfortunately, by then I also owed my mum sixpence.