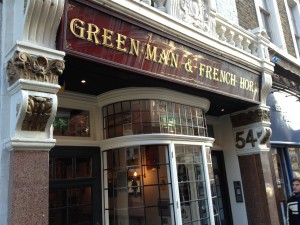 I have been traveling a ridiculous amount recently. The last two months have seen me in Singapore, Kuala Lumpur, Dubai, Abu Dhabi, Cyprus (twice) and I’m writing this from a hotel room in Sharm El Sheik. There’s nothing quite like doing comedy in a country on the brink of its second revolution within a year, but that doesn’t seem to be unduly worrying the British holidaymakers I’m (hopefully) entertaining this evening. To be fair, we are some way from Cairo and President Morsi’s dictatorial edicts, but I’m more concerned that I have forgotten both my pink polo shirt, tattoos and extra biceps, though you’ll be glad to note that I did pack lots of extra snobbery instead. Personally, I wouldn’t mind a minor upheaval over the state of the buffet, but I imagine a little light tutting is about as heated as it’s going to get. 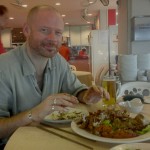 Getting messy at Long Beach

The hotel buffet is one of the trials of the international comedian/traveller. When you rock up on the first day of the tour to see everything spread out before you, gleeful palm rubbing and gluttony tends to ensue. However, by day four you are just screaming out to order something from someone, as opposed to plucking another variation on a theme from a place you’ve already visited approximately eleven times, depending on your boredom threshold and sleeping patterns. I’m not reviewing any of the places I stayed at as that would seem unwise when someone else was paying the bill and I’d like to continue working for them (in most cases.) I did visit Long Beach in The East Coast Seafood Centre in Singapore for black pepper crab, which was quite a relief for Daliso Chaponda as I may have gone on about it a bit beforehand. It’s quite touristy, by which I mean expensive, but it has become something of a tradition for me when I’m there. Having said that, I was then taken to Jumbo Seafood on Boat Quay by my friend Angela, who lives in Singapore, and it was a little more hectic, but equally good, more central and a little cheaper, so maybe it’s a tradition that needs revising. I didn’t blog about either of them at the time because my fingers were covered in crab and black pepper. 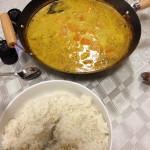 The best food I’ve eaten recently was a carrot and coriander soup and a chicken and sweet potato curry cooked for me in Cyprus by my friend Mick Ferry, but I’m not going to blog about that either because he’s not a restaurant. I wish he was. The food would be great and there’d be some brilliant comedy, not to mention a drink or two, but that’s maybe an idea for the future.

One of the upshots of all this gallivanting about is that I have also missed a couple of those vital editorial meetings for No Pressure To Be Funny I may have mentioned previously. Rather rudely, James O’Brien and Nick Revell have found a new haunt without consulting me, and as far as I can gather, have practically moved in. The Green Man and French Horn on St Martin’s Lane used to be a pub which was especially handy after a gig as it served a very nice pint of Guinness and stayed open til midnight, but not any more. It has been taken over by the team behind Terroirs and Soif and James and Nick have been, frankly, gushing, as have many other, more respectable critics. 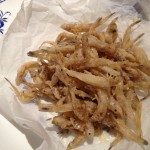 The interior is like a pubby Terroirs, if a little corridory, but everything was jostling along nicely, and I ordered an excellent coffee and sparkling water as I waited for my colleagues. One does feel a little packed in, but the seating did afford us a perfect view of the two Frenchmen on the next table who appeared to get through six bottles of wine at lunch without appearing pissed, which deserves some sort of recognition. To be fair, I think they were tasting the wines in a professional capacity, although I do wish they’d had a Green Horn each for additional comedy value. 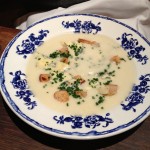 I found the menu a little irritating. Prices varied considerably and I’m not sure I wanted to pay £5 for radishes anyway. I was going to have rillons of pork (like rillettes but roasted before serving,) but as I was having black pudding with pot-au-feu vegetables for main course, I decided this was all a bit meaty, and opted for some excellent whitebait instead. These were crunchy, fishy and unbelievably moreish and I have to admit the method I used to eat them is probably best described as shoveling. My only criticism would be that a little tartare sauce or similar would have added another dimension, but they were delicious, as was James’s Jerusalem artichoke soup, although he knew that, because it’s what he always orders. Nick didn’t have a starter, mainly because he appears to have already tried everything on the menu. Twice. 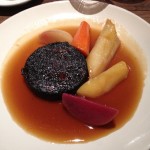 I had chosen my main course because the slip soles and seaweed butter didn’t come with anything else, and for £16.50 I rather wanted them to. The black pudding was superb, while the vegetables were perfectly serviceable, but I did prefer the version I had at Terroirs, principally because there were more of them. Nick’s Saucisse au Coteau were big, chunky, serious sausages, with a lovely meat and herbiness, while James’s mouclade of mussels was the best thing we ate – plump and juicy mussels in a cream sauce with the perfect curry hit. We shared a small carafe of Coteaux du Vendômois, which is pretty much worth going back for all by itself, and finished with espressos as none of the desserts particularly grabbed us – although James tells me I am going to regret not ordering the pear with salted butter caramel until the day I die, or until we go back, at least. 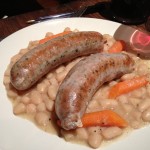 And I’m sure we shall. However, my lunch did come to £40, which is pretty steep when you didn’t order quite what you wanted to. I would definitely recommend the Green Man & French Horn, if not quite as unconditionally as my companions, who are probably in there as we speak, and I will also say this for it – it is half an hour away from my house and it is most definitely not a buffet.

P.S. No Pressure To Be Funny has just launched its brand new website, which can be found here.