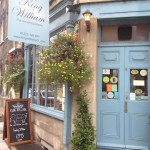 As a former schoolboy and resident in Bath, I have walked down the London Road at all times of day and night, and in all sorts of states. The traffic island by the bridge leading out on to the Warminster Road was the scene of a miraculous discovery by a search party in the wee small hours many years ago. I can say nothing about what was found except that (most of) it had been purchased at The Hat & Feather the evening before – anyone with a passing knowledge of Bath in the eighties and nineties will know what I mean. The London Road itself used to become progressively dodgier the further you went along it – there was a famous stabbing at the Longacre Tavern a few years ago, and any pub whose history includes both the words ‘famous’ and ‘stabbing’ is probably best avoided. This has become easier as the road itself has somewhat gentrified, a process which has included the little-mourned departure of The Longacre Tavern. 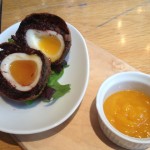 The best known pub in the area now is a very different beast, and has attracted acclaim far and wide for both its food and its attitude. I first went to the King William one hungover morning some years ago after a friend’s wedding, having heard good things and in need of a Sunday roast. The roast was excellent, but the price tag gave me a bigger headache than the one I’d brought with me. However, they were clearly ahead of the curve, as the eye-wateringly expensive Sunday lunch has become very much the norm these days – happily on this visit, the bill seemed far more reasonable. 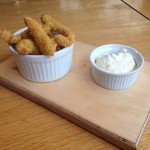 My friend Philippa, who has appeared in Food Ponce a couple of times, has had the very good sense to move to Bath and as I was working there in the evening, lunch seemed a mind-bogglingly stupid thing not to do. The King William is the kind of space that the phrase ‘lovely little pub’ was invented for, with its relatively tiny bar snuggled in between two rooms containing the kind of furniture that is probably a lot more expensive than it looks. It is almost impossible not to fall in love with a place that offers crispy pigs’ ears as a bar snack so I ordered some. To be honest, they were a bit more crispy than ear-y, but tart(ar)ed up they made a marvellous nibble and I was just glad they were there. 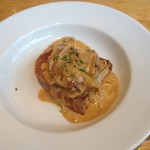 There is a perfectly sound bar menu including pretty much everything you’d expect – fish and chips, steak, a burger – and a changing lunch menu, with three options for each course, none of which were exactly rewriting the rulebook, but then we have rules for a reason. A gorgeous black pudding scotch egg came with a perfectly runny yolk and a homemade piccalilli with just enough wince to cut across it. Chicken livers on toast are simple enough to do, and therefore very easy to cock up, which they avoided with perfect cooking and a rich creamy sauce subtly undercut by thin strips of what may well have been ever so slightly pickled mushrooms. 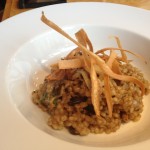 For main course, wild mushroom, pearl barley and parmesan was exactly the earthy delight you’d imagine – with shards of parsnip to elevate it from comfort food to something a little more refined. My pan-fried haddock with shallot and caper potatoes and caper butter looked divine, although I generally believe bowls are for fish to live in rather than to be served on. It was cooked to perfection with a crispy skin and everything tasted fine except, and it pains me to write this, the fish. We both tried it and agreed that it retained that slightly fishy tang denoting a slight lack of freshness, which is really not what you expect from somewhere doing everything else so well. 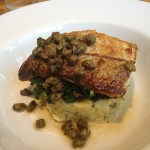 Pan fried Had It

It always strikes me as a little odd when wines are described as drinkable, as you would think that was the least they should aim for, but both a Maccabeo Chardonnay and a Picpoul de Pinet were exactly that. Desserts didn’t really tempt us as neither of us felt like brownies or brioches or cheese at lunchtime and so we asked for the bill. By this time, the bar was unsurprisingly full, although in one this size that’s not all that difficult, and the smiling manager handed me a bill for £50 excluding generally excellent service. I was far too English to mention the fish, and it seems uncharitable to bring it up again now, but I do so merely to highlight how pleasant the rest of our experience had been. The King William is a fine pub that deserves to be doing as roaring a trade as its size allows, and on my next visit, I’m sure that fishbowl will be nothing more than a distant memory.