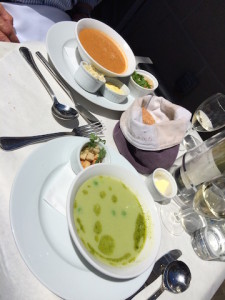 Can it be soup?

If you haven’t been for lunch with an old friend in the sunshine recently you probably should. I first met Martin in 1982 with the awkward handshake reserved for 10-year-olds who can’t understand why they’ve been forced to leave home to live with strangers. It’s fair to say our friendship has been through many of the tribulations you would expect of 30 years but the fact we’re still meeting for lunch would seem to indicate it’s still intact. The last time we met was at Rowley Leigh’s estimable (and sadly now closed) Café Anglais in West London – a thoroughly delightful restaurant in a curiously characterless room. It was also in Whiteley’s shopping centre, which would have given me plenty of room to sneer, (always good for a blog,) but I didn’t write about it – perhaps because the food was excellent and I didn’t pay. 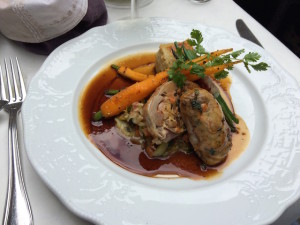 I was working in Bath, our old stomping ground (where Martin still works,) and we’d arranged to meet; the only problem was where. Bath was never that good for restaurants – having claimed to have invented eating out when the legendary ‘Hole in the Wall’ opened in 1952 (and run by an old boy from our school,) it pretty much rested on its laurels for the next fifty years. You can spend a lot of money if you choose (I’m looking at you Royal Crescent,) and there are many of the usual options available to the generic shopping experience diner. I’m probably being slightly unfair – I’m very out of the loop in Bath terms, and it is 2015, where every dive you used to stagger out of in the early nineties now has a cider sommelier and its own range of bespoke Scotch Eggs. I have heard amazing things about Menu Gordon Jones, but could almost feel its answerphone laughing at me when I called hopefully the morning before. However, another friend had suggested Casanis, approximately thirty yards from Martin’s office, which, as these things tend to, had completely slipped his mind. Luckily, he was in full approval, and was waiting for me in the tight little suntrap of a courtyard at the back when I arrived fresh from the joys of parking half a mile away for the fun of it. 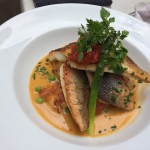 There was a pleasing bustle about the place that would probably have dissipated if we’d actually spread ourselves throughout the restaurant, and we got on with the serious business of chatting. It took us a while to get round to looking at the menus, indeed long enough that certain London eateries would probably have tried to reset the table by the time our very patient waiter took our order. Luckily this didn’t take long as it was a smart and confidently short selection of French classics with a couple of specials, all hovering around the reasonable side of pricey. 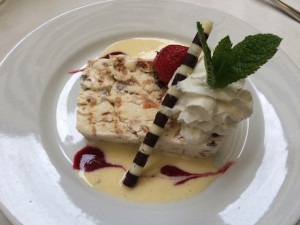 My asparagus and pea soup was green. Very green. Indeed I’d go as far as to say purest green, and see which of you knew which 80s comedy I was quoting to see whether or not we could be friends. It was also somewhat insipid. There were certainly a few peas floating around and I could definitely taste asparagus, but it was easily the most unremarkable thing we ate, which, considering it was perfectly ok and mopped up with some rather nice bread, is the closest to praise it’s likely to get. Martin’s soupe de poissons was much more like it, dark, serious and tasty – a proper classic with all the classic bits arranged classically – and a much better indication of what Casanis is all about. Annoyingly for Martin, I’d also manoeuvred him into ordering the gurnard and sea bream fillets with basil and tomato gnocchi and crab sauce, as I wanted to try it. This was another fine example of what happens when you put good things that work together, er…together, but was also not a million miles away from his starter in taste terms. I did this mainly so I could order the quite fantastic ballotine of quail, stuffed with julienned vegetables and served with one of those shinily reduced sauces that can be called a jus without anyone needing to be punched. Placed alongside this was a square of pommes dauphinoise so French it would have slept with the kitchen sink if it had put on a tutu, and reminded me exactly why this is my favourite way to eat potatoes. 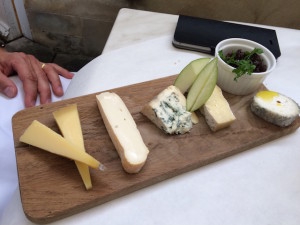 Dessert was a prettily arranged iced nougat, saved from terrible over-sweetness by a sharp red berry coulis, and a proper cheeseboard with comté, stilton, reblochon, camembert and a fine chèvre. This was the sort of food that forced British people in the seventies to admit that France was not all bad, and when done properly, as here, it’s simply very hard to beat. An expertly arranged wine list had led me to an excellent dry white, which I enjoyed so much I’ve completely forgotten what it was, but the bill reliably informs me was a Perrins white at £26.50. All I can say is that the Perrins family know what they’re doing, even if I don’t.

A cafetière and a bill of £100 left us feeling utterly replete, which is not a word I use lightly, but if eating out was invented on George Street sixty years ago, the tradition is alive and very well five minutes up the road. I just wish it had been there thirty years ago as it would have saved my parents any number of mediocre pub meals where they tried to buy my forgiveness for essentially outsourcing me for my entire adolescence. Not that I’d change a thing – for a start, I’d have been eating this meal on my own. Good company in a good restaurant in good weather is where you’ll find me at my happiest, and Casanis more than held up their end of that particular trinity, while Martin and I took care of the company. Of course the sun was shining. It would have been rude not to.