After the delights of Les Deux Salons last week, it was really not my intention to be going all out high end French restauranting again for a while, but then I have no power over when birthdays fall or the fact that for various reasons I had to take an old friend out in the Islington area to celebrate his. I lived in N1 for many years, and was always slightly surprised that for such a supposedly socially mobile area, the majority of its restaurants were as disappointing as the government that resulted from the deal struck in its most famous one. Granita is long gone, replaced now I think by some Tex Mex joint, although I did have a great meal there years ago. It was a date, and I seem to remember things working out for me too, despite the idiocy of taking the girl in question to see Gary Oldman’s light romantic comedy Nil by Mouth first. I don’t know what I was thinking, but clearly Granita was a magical place for negotiations, and the food was excellent.

I also ate at Almeida when Terence Conran first opened it, and was very disappointed. My overriding memory is of garlic, garlic and more garlic. Now obviously I like garlic, but not that much – I came away smelling like the French do in crap jokes. They also put tomatoes in a Coquille St Jacques, which is just plain weird. By a bizarre quirk of fate, my friend and I went to school with one of Conran’s sons, who once took him on a family holiday where most of the cooking was done by a chap called Simon Hopkinson who was trying out dishes for some new venture called Bibendum. Now that’s what I call self-catering. Almeida is no longer a Conran concern, and the chef is one Alan Jones, but I would go as far as to say Mr Hopkinson would be hard pressed to improve on what was coming out of his kitchen. 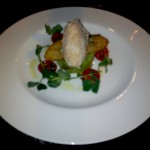 We started with a couple of glasses of Piper Heidsieck at a frankly irritating £20, but it was a birthday, so I mustn’t carp, although in drinking terms, I much preferred the very versatile Beaujolais-Villages (still not given away at £32) we had with our food. I went for Cornish crab with avocado tian, confit tomatoes and lemon olive oil and dared them to put garlic anywhere near it. Mr Jones clearly wouldn’t dream of it – this was all the things it should be; the crab was the star, but wouldn’t have performed nearly so well without the supporting cast – with the added crunch of a melba toast and sparky green shoots to lift the whole dish. This contrasted nicely with the rich, earthy wood pigeon and puy lentils across the table, which came with lardons and a beautifully reduced sauce.The meat/fish theme continued into the main courses as my friend went for plaice with girolles, artichokes and a shellfish foam – very clever cooking, and a good example of the subtle difference between here and Les Deux Salons – both are excellent, but there are perhaps just a few more bells and whistles (and foams) involved at Almeida. 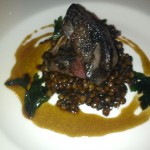 Whether or not that is a good thing is up to you. On a simpler level, my suckling pig was just the porkiest bit of pork I have ever eaten. It had the sort of piggyness that would have Jay Rayner reaching for tissues. Again, what he’d be using them for is up to you. Incidentally, if you didn’t know, Pommes Pont Neuf is French for chunky chips.

After the brilliance of the mains, the desserts were a slight disappointment. I very much liked my caramel and cocoa nibs crispy thing (called a brislet on the menu, although I can find no mention of this word anywhere else in the world, except in reference to a township in Polk, Minnesota,) but the pannacotta and red wine poached cherries were fairly unremarkable, and the crème brulee was a little shallow and not quite as smooth as it might have been. By this stage, we’d come to expect better things, but then the bar had been set very high. 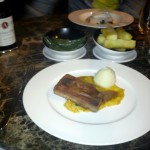 The bill came in at just under £150, including efficient and friendly service, although I did find the addition of a pound for Action Against Hunger a bit ridiculous. I’m happy to pay it, and obviously I admire the charity and the sentiment, but a) I had no idea it was going to be added to the bill and b) when you’ve just spent 150 quid on dinner for a blog called Food Ponce, one pound for Action Against Hunger just sounds like you’re taking the piss really, don’t you think? Again, I’ll leave that up to you.

If you had to decide between Les Deux Salons and Almeida, I have to say I would probably opt for the former, but this particular Tour de France was a close run thing, and the food at the Almeida is unrecognizable from my previous visit. Things change over time, which is of course why the birthdays keep coming. Sometimes, that’s no bad thing.