I was in Manchester last week to make a short film written and directed by my good friend Mick Ferry. I played a particularly nasty corporate type interviewing a hapless candidate played by the excellent Alex Boardman, and began by overacting massively until I was instructed by Mick to just pare it down to ‘the normally cutting sarcastic twat you usually are.’ So, quite a stretch then. Clearly, for all their civic pride, Manchester still needs to import cutting, sarcastic twats from London, which may explain why the BBC is moving there.

I had a few hours to kill after we wrapped (you’ll have to get used to the terminology – I’m going to be unbearable after the Oscars,) so after a quite unpleasant Guinness in the KRO Bar I went looking for somewhere to eat. I have always been a fan of the Malmaison chain, even if they do have a nasty habit of appearing as the slightly tacky celeb and footballer’s hotel of choice. I ate in the Manchester branch in similar train catching circumstances a few years back and was impressed both by the service and what I seem to recall was fairly classic and not inexpensive brasserie cooking. I’ve since sat in the bar trying to look like I’m friends with Rob Newman and Johnny Vegas, and have always found the place on the bearable side of trendy – if Wayne Rooney wants to nip out for a fag, so much the better.

The old restaurant is now gone, however, and what we have in its place can only be termed a ‘high concept makeover.’ Well, there are other terms you can use, but I’m trying to be nice. We should start with the name. John Cleese stated that his three rules of comedy were,

I think this is a bit harsh as the work of Tim Vine, Milton Jones and Gary Delaney will attest. However, it is an excellent rule for restaurants (if not hairdressers.)  As a fully qualified comedian, I am able to tell you officially that Smoak is an awful pun on any number of levels. If I need to explain why, then perhaps you should stop reading and go and work for one of those rebranding agencies that have the temerity to charge tens of thousands of pounds and call themselves creative just because they’ve discovered a new font. 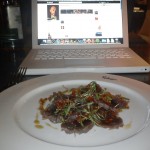 So, I don’t like the name, which is a shame, because they’ve plastered it everywhere in an attempt to create an on message trendy U.S smokehouse feel to the place through the medium of brushed steel, banquettes and animal cadavers. Oh, and Brazilian coffee sacks on the wall in the bar too, for reasons unknown. However, the welcome was smiley and efficient and I was immediately found a seat, next to what appeared to be a bunch of hairdressers, interestingly enough. Quite how The Velvet Underground playing in the background fitted in with the intended ambience is beyond me, but as I settled down with the menu I rather enjoyed the incongruity.

Much play is made both on the website and the menu about the Josper Grill which is essentially Spanish, hot, and in cheffy terms, shit hot right now. I have to say, I find the website very irritating – I want information, not paeans to a mythical chef called Mr Sharp – but Smoak probably finds me equally annoying for not ordering something off the Josper. I’m really sorry, and when I next want a steak by Piccadilly Station, I may well re-visit and re-view, but on this occasion, I just wasn’t in the mood. Added to which, there are some interesting alternatives, so I plumped for the tuna carpaccio and the poached loin of lamb.

The tuna was excellent – apparently there was aniseed cress and a soya and lime dressing, but what I got was more chilli heat with a little of the lime and a dressing that steered just the right side of ranch – an intelligent and interesting alternative to normal steakhouse fayre. I hoovered it up like Lou Reed with a line. 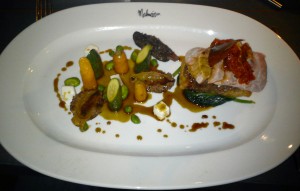 The lamb was less successful, because it felt like a number of dishes not sure which way to jump. It looked lovely – moist, if slightly bland lamb that was, for some reason, resting on an onion tart. Both were fine, but like a number of the celeb couples that will inevitably eat here, I just wasn’t quite sure why they were together. The vegetables and morels were arranged artfully, but a little under seasoned with an over reduced sauce, and goat’s cheese may be on trend right now (see Dinner) but here it felt like an afterthought. As a whole, the dish wasn’t bad, just a bit confused, which I think is a criticism you could level at the whole venture. I passed on a dessert menu which included jam roly poly, banana split and chocolate sponge mainly because it seemed intent on taking the smokehouse concept and inserting it into Grange Hill.

Maybe I’m being a little unfair – service was excellent and the bill came in at just over £30, which is steep, but not massively unreasonable. I have to say I preferred the restaurant’s previous incarnation, but then maybe Smoak is not aimed at me, and I hardly gave it a fair crack of the whip by not ordering from the grill. Before I left, however, I did use the gents, only to find the urinals were fashioned from ol’ tin buckets, which was a conceptual step too far even for me. As it was, I made my way to the station after my latest trip to Manchester, reflecting that it’s one thing for me to overact, but quite another for a restaurant’s loos. I might have to send Mick Ferry in there to give them some direction.