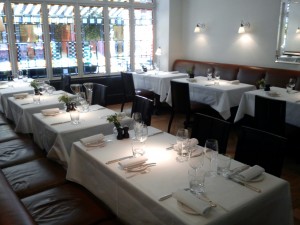 So, we were meant to be going to Le Gavroche for lunch as it was my friend’s 30th birthday and the recession is clearly something that is only happening to other people – we had eaten there once before and were thoroughly looking forward to the rematch, if not the bill. Unfortunately, due to a combination of crossed wires and unbreakable commitments, we were unable to fulfill our booking and had to cancel our table (typing this last sentence has caused me actual pain.) As a result, it fell to me to find somewhere with at least a slight sense of occasion, if not the chance of Michel Roux Jr looming around a corner, and I remembered that my friend had mentioned how much she wanted to eat at Quo Vadis. With his politics apparently gathering devotees in these straitened times, what better venue than the building in which Karl Marx wrote Das Kapital? 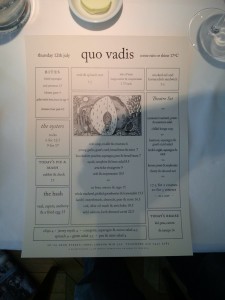 My apologies for mentioning the economic climate twice in the opening paragraph, but two other considerations did factor in my thinking – firstly the chef at Quo Vadis is now Jeremy Lee, and secondly, he appears to have given the restaurant a good shaking down to almost universal praise, which also seems to have extended to a lowering of the prices, but not the standards.

I’m a big fan of Jeremy Lee. I can’t claim to have eaten his food before, but like so many people these days I get to feel I have through the medium of television, particularly Great British Menu, which I think I can now say has replaced Masterchef in my affections. This is mainly because it is slightly more exciting to see top chefs competing with each other than talented amateurs, but also because it’s slightly less ubiquitous (although passing The Square the other day, I did see they had Philip Howard’s ‘Tasting of Cornish Mackerel Great British Menu Winner 2012’ on the menu, so the rot has clearly begun.) Mr Lee has always impressed me by being admirably restrained and tasteful in his comments, but most of all I like the way that his campness seems to slightly freak out the other Scottish chefs, particularly Alan Murchison – who clearly cooks amazing food but always looks to me like he’s on the brink of a psychotic episode. 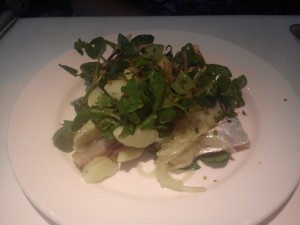 I have walked past the imposing building a thousand times, and always thought to myself that I must go inside, or ‘beyond the great edifice’, as the website grandly puts it. Once there, they have managed to pull off the neat trick of formal informality – all linen and wild flowers rather than crystal, cutlery and ‘arrangements’. We were offered the opportunity to have a drink at the bar, but as I’m still not drinking until the end of the bloody Edinburgh Festival, we decided to go straight to our table. We were first to sit down, but what was interesting was how the room filled up almost to capacity through the course of our meal but with no real change to the atmosphere beyond the pleasant thrum of people enjoying being fed. This is a great room to eat in. 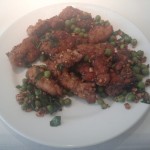 Continuing the theme of elegant simplicity, we were offered brown or white bread. Both were excellent. The menu offers a number of options on one pleasingly clear card – bites, oysters, a pie, a two or three course theatre menu and an à la carte. To start with I had squid, samphire and bean salad which was beautifully lifted with a little mint and parsley. The addition of breadcrumbs roasted in olive oil added a clever texture that transformed a very good starter into an excellent one. The mackerel, potato and watercress salad was another brilliant balancing act of fresh simplicity and both plates were returned pretty much licked clean. The mains were, it has to be said, a little small, but then we did decide not to order any side dishes, and it was only lunch, after all. I could not resist lamb’s sweetbreads with peas and almonds – the nuts coating the sweetbreads and doing a similar job to the breadcrumbs in my starter – delicious, although if I was to be ultra picky, the tiniest bit greasy on the outside and not the most elegant plate of food I’ve ever eaten. Lamb’s onglet was gorgeous – rich, tasty, and frankly lamby, with slightly charred asparagus setting it off perfectly. 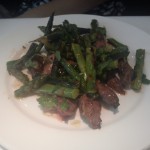 For dessert, there was an excellent cherry and almond tart that was moist and chewy yet with stunningly crumbly pastry, clotted cream and soused apricots. I couldn’t resist the St Emilion Au Chocolat, which I pretty much inhaled – promptly undoing all my good work on the alcohol front. I seriously would not advise driving after this pudding – added to which, a run might be a better idea as you could clearly use the exercise. This was pure calories, with a dollop of double cream on the side, just in case. Absolutely delicious, although (and I never thought I’d find myself writing this) possibly just a little too boozy even for me. 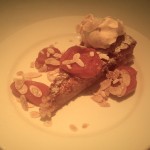 With an excellent glass of Italian house white (gavi) and sparkling water for me, our bill came to £68 including impeccable service. I know it’s not the done thing to disclose how much you paid for a birthday lunch, but I think it’s worth mentioning here as, for a special occasion, I think this represented fantastic value. Added to which, she got a present too, so she’s not allowed to complain. I’m sure this line has been used before, but if ‘Quo Vadis?’ means ‘Who goes there?’ then the answer is “Me please, again. As soon as possible. And not just for birthdays”.