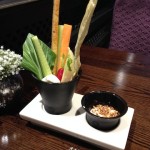 To Edinburgh. For a delightful weekend at The Stand – one of my favourite clubs in one of my favourite cities. Yet again, I failed to go to the fabled Sweet Melindas, mainly because I get a free dinner at The Stand in the evening and if you’d tried their chicken burrito you’d understand. I have been wanting to eat Tom Kitchin’s food for a very long time though, and on a whim gave the restaurant a ring on Friday morning – to my amazement, they offered me a table at 12:15 as long as I vacated it by 1:45. I bounced down to a Leith like a very happy bunny, wondering if I was going to eat one, because that is exactly the sort of Scottish ingredient that Mr Kitchin is very passionate about, as I was about to discover. 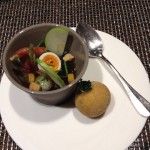 The walk was a joy in itself; when there’s a bright blue sky and sunshine over Leith it’s hard to think of a more handsome city. I passed Fishers where I’d been fed so well in August and on to Commercial Quay and The Kitchin, which is very glass and bespoke yuppie flat development from the outside, but once inside smoothes its edges into something less severe – all dark wood, blues, purples and a very warm welcome.

Happy as I was to be there, I didn’t fancy shelling out on starters that generally hovered around the £20 mark as I wasn’t actually celebrating anything, but luckily the very reasonably priced set menu (£28.50 for three courses) had quite a lot of things I wanted to order on it. While I was deciding on them, one of the sunny pack of waiting staff who buzzed round the restaurant brought me a selection of crudités with a Strathdon blue cheese and buckwheat dip and a cheddar cheese stick that achieved the unique feat of making me like carroway seeds. This was simple brilliance – crunchingly fresh veg with the simplest presentation that made you wonder why every meal didn’t start like this. Soda bread arrived and all I wrote in my notes was ‘God this is light’. I ate the whole loaf. 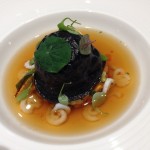 A small rolled map of Scotland was popped on the table with the explanation that “the chef is very passionate about Scotland and Scottish produce,” which might have been a nice, if slightly twee touch were it not that you overheard the waiters repeat this mantra at every table, as a result of which it began to sound more like you were being initiated into a cult. Added to which, I was about to find out exactly how passionate Mr Kitchin was about Scottish produce by the far more effective method of tasting how he put it on a plate.

An amuse bouche of pheasant jelly set the tone – a deeply gamey wobble with a lively tang of apple, and a soft boiled quail’s egg with crispy bacon giving it a hint of the very best breakfast you’ve ever tasted. Just when you were thinking you couldn’t improve on perfection, the addition of a croquette of braised leg meat proved you could. 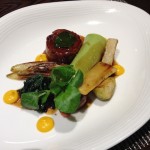 I don’t think I like Monkfish liver which is exactly why I ordered it – if I was going to find anywhere that made it work for me, this was probably the place. Another beautifully assembled dish, with a plump squid ink ravioli rested on minutely diced vegetables and shavings of squid and a delicate squid consommé poured over it at the table. The meaty fish and liver inside had the best touches of offal cooking about it – something felt slightly wrong with it which is what felt good. I still came away thinking that I wasn’t sure about monkfish liver, but interestingly, in the day or two since, it is the dish I keep on returning to in my mind, which can only be a good thing. Not quite my favourite dish of the day, but easily the most interesting.

A ballotine of partridge with winter vegetables could frankly have been wearing a kilt and playing the bagpipes were it not for the accompanying cannelloni, also containing beautifully moist meat. The sauce was one of the most deeply flavoured I have ever encountered, almost oily in its intensity, and the last of my soda bread was called in to action to wipe the final slick away when no one was watching.

I was torn between the lemon soufflé and baked Alaska for dessert until one of the waiters fixed me with a far away look and said in a low voice “The soufflés are very good”. 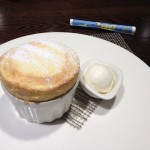 THAT soufflé. And map.

Oh my god. That is all. The lightest thing but beautifully rich with a smear of curd running through it and a slight sugar crust around the edge – and a quenelle of just soured crème fraîche ice cream to redress the citrus and heat when you wanted it. I started to understand the look in the waiter’s eye. I think he was trying not to cry. I don’t think a pudding has made me this happy in a long time.

By this time, my appointed hour was nearly up and I offered to go through to the bar for my coffee to free up the table – I particularly liked the fact that they didn’t ask me to. Petit fours of a very indulgent carrot cake and a rhubarb macaroon seemed the perfect end to the meal, but once again Tom Kitchin proved there was time for an extra touch by walking in to the bar to check that everyone had enjoyed their lunch. This didn’t look like showing off, but a genuinely heartfelt wish to have a few words with each table to ensure they’d enjoyed themselves and I particularly appreciated the chance to whimper at him about the soufflé. 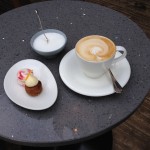 As I walked back up to town, I tapped the following into my phone:

“There are times when the opportunities my job affords me make me absolutely glow with pleasure. This was one of them”.

And it was. That was when I noticed Tom had followed me on Twitter. Oh he’s good, ladies and gentlemen, he’s very good indeed. 2014 – the bar has been set.