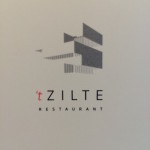 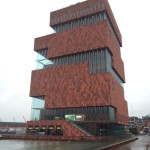 Last week saw me in Belgium for a couple of days for gigs in Brussels and Antwerp to rooms full of extraordinarily civilized people. While I remain undecided which way I will vote should the proposed in/out referendum on the EU materialize next year (in an unusual example of David Cameron actually keeping one of his promises,) my instinctive leaning towards inclusivity would seem to place me firmly in the ‘Yes’ camp. The behaviour of festive audiences in Belgium compared to the UK, on the other hand, would have me happily voting ‘No’ – on the proviso I can move to the continent and leave Britain and its leery obnoxious drunken Christmas parties to float off into the North Sea whilst gangs of pissed secretaries and Neanderthals with self-esteem issues throw up over the side. 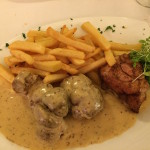 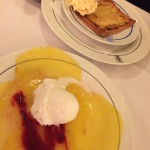 I have been a comedian for too long to put up with some of the idiocy we normally get at Christmas time, and something seems to have clicked in my psyche this year whereby I have properly lost my shit twice in the past ten days; once at a moronic heckler in Greenwich and secondly facing down an entire table of boorish builders in High Wycombe. I am not the aggressive type, so I can only blame a confidence that I wouldn’t have been doing this job all over the world for over fifteen years to rooms full of laughing people if I had never said ‘something funny’ (Greenwich.) Similarly I’m pretty sure I’ve got more jokes than Oscar Pistorius has limbs (High Wycombe) which, to be fair, would have been quite a good heckle if I hadn’t been having a very passable gig to the 95% of the room who had been paying attention up until that point. Even so, calling a builder a c**t and offering him out when he is a) drunk and b) surrounded by lots of other drunk builders, is the sort of idiotic behavior I am only likely to indulge in when I’m on stage and adrenaline has taken the place of intelligence. Still, he left, and I remain convinced that on this occasion, he was a c**t, so I’ll chalk that down as a festive win, thank you very much, especially as his boss came to find me afterwards to apologise for his entire company. 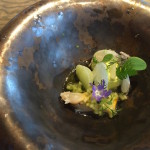 In Belgium on the other hand, I performed two hour long sets to not one heckle, and generous laughter and applause. That’s a whole hour of me. Twice. And no ‘participation’. Belgians are not just polite, they are clearly also amongst the most patient people on the earth – and all this in a country that thinks nothing of 12% proof beer. God alone knows what havoc that would wreak on the December streets of Leeds or London should it ever spread across the Channel. 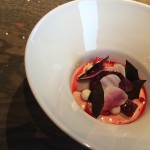 We spent a day in Brussels first, where I had booked a table once again at the wonderful Taverne du Passage, the stunning brasserie where I had a run in with my nemesis in the form of tete de veau a couple of years ago. The resultant blog was the most popular I’ve ever written, but that positivity was somewhat undermined by the fact I had ruined my own meal to write it. This time I was under strict instructions from my wife to order stuff I knew I liked and we had a quite fantastic meal. Rather like Terminus by the Gare du Nord in Paris, this is simply everything a restaurant should be. The only off note was a misunderstanding that meant my wife had scallops instead of snails to start, but as they were ‘probably the best scallops I’ve ever eaten’ we were hardly likely to send them back. I had the best mushrooms I’ve ever eaten (again) on toast that clearly understood everything tastes better cooked in a lot of butter. I still went a little experimental on main course in that I opted for offal, but my veal sweetbreads and kidneys in a mustard sauce were cooked so beautifully I almost got a little teary. After finishing on a perfect apple tart with the most vanilla of ice creams and a delightfully zinging pineapple carpaccio, we paid the €150 bill happily and headed off to look at some Magritte paintings as we were, after all, in Belgium. This was the sort of meal you could have eaten at any decent continental brasserie at any point over the last couple of hundred years except we didn’t. We ate it at the Taverne du Passage, served by the most charming of waiters (even if he didn’t know his snails from his scallops,) and we loved it. 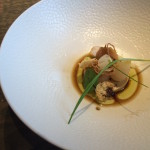 The next day in Antwerp, we had booked lunch at the two Michelin starred t’Zilte at the top of the magnificent MAS tower. This was one of those settings so imposing you almost felt like an intruder – all the way up to the 9th floor to a single door behind which lay some fabulous food and a lot of people considerably more wealthy than we are. Luckily the staff were very welcoming, if a little formal, but that was only to be expected given the extraordinary technique on display from the kitchen. I had had a glass of thoroughly smooth Bordeaux in Brussels, but here we stuck to mineral water just to help us appreciate what was put in front of us. I do like a set three-course menu (€68) when the chef clearly has no intention whatsoever of only serving you three courses. 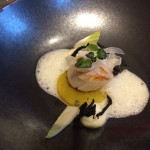 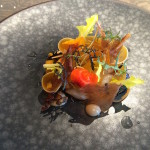 A basket of varied and beautiful breads was brought and slowly dispatched through the meal as the first appetizer was put in front of us – malt crackers with a hazelnut sour cream, dotted with a little caviar. The sort of thing Philadelphia and lumpfish roe wants to be when it grows up. This was swiftly followed by cucumber and kimchi clams – all creams and textures (including a little iced puck of cucumber that was a joy to eat.) My only criticism was one of the clams was still gritty, but luckily I am not a Michelin inspector, although, should they be reading, I am very much available, especially over the festive period. The plate was also one of the prettiest imaginable, a theme that continued throughout the meal. This was food as art, and even if I wondered if flavour was sometimes slightly sacrificed to the aesthetic, it was truly impressive stuff. And each dish kept on getting better. Our second appetizer was a delicious concoction of beetroot with capers and thyme, whilst our third (three appetizers! Now that is what I call three courses!) was a sublime disk of ‘poultry liver’ terrine topped with baby onions individually stuffed with langoustine tartar. As my wife said, someone has actually had to stuff each one of these tiny baby onions. This was astonishing attention to detail, and even if a little of you could not help but think ‘what is the point of this?’ you ate it, and realized in that very mouthful the answer to your own question. 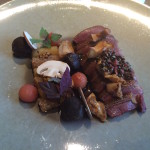 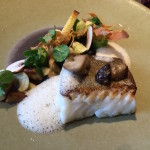 There was no choice of starter, and a complex dish of thinly sliced pumpkin with its seeds, tuna flakes and diced scallop tartare arrived, followed swiftly by another plate with a beautifully cooked single scallop and a scallop foam, ceps and charred chicory. They complimented one another perfectly, especially the earthiness of the vegetables against the sweetness of the seafood, although we both agreed the fishiness of the tuna flakes was an acquired taste we weren’t quite sure we’d managed to acquire. 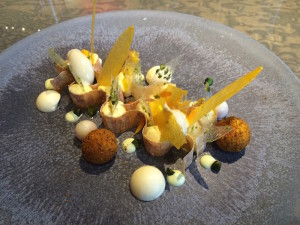 My wild duck main course was another object lesson in plate dressing, with tiny spheres of pear and boudin cutting through the gameiness of the meat and a quite wonderful sauce. My wife is not a duck fan for reasons I simply cannot fathom, but they very kindly brought her a perfectly cooked fillet of translucent cod, with another seafood foam and ceps. Not a million miles away from our starter, but that is hardly a criticism especially considering it was off menu.

Dessert was mind-blowingly good – indeed the only problem I had was that by eating it, it felt a little like destroying a work of art. One made up of white chocolate, textures of sea buckthorn, pistachio, lemongrass shards, wafer thin pastry waves to echo the perspex shapes of the building and a little ginger ale vinaigrette. So, frankly, this was a work of art that needed destroying and we thoroughly enjoyed doing so. 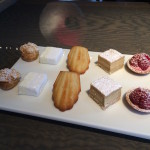 Excellent coffee was accompanied by two home made truffles and a plate of quite stunning petit fours including some of the best madeleines we have ever been lucky enough to put in our mouths. The bill came in at €200 including service, which may be quite a lot to spend on lunch, but this level of cooking costs money, and for me, it felt like genuine value for money. Especially as, by my reckoning, our three course meal had been nearer eight courses long, and one gritty clam apart, utterly faultless. 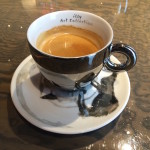 My waistline would not let me eat at Taverne du Passage every day, (although I could see myself putting that theory to the test if I did move to Belgium,) and t’Zilte must go down as one of those rare special treats one allows oneself from time to time, but every now and then you do think ‘Hell, it’s Christmas,’ and this is how I like to behave at my Christmas party. Especially if I have to go and do a gig afterwards, which I am delighted to report was awesome in Antwerp, and infinitely preferable to ghastly in Greenwich, or horrible in High Wycombe.