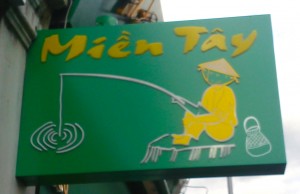 This is the first time I’ve experienced the dilemma of writing about one of my personal favourites and worrying that I mightn’t be able to get a table on my next visit, so I have brilliantly circumvented the problem by not having enough readers to make the already packed Mien Tay on Lavender Hill any busier. Added to which, approximately one hour after we left the premises, feral gangs of fuckwits began looting the Debenhams a couple of hundred yards down the road, before ‘showing the rich’ by ransacking a (wait for it) party supplies shop and then torching a couple of flats. Wow. What a way to ‘get your taxes back.’ Wish I’d thought of that, especially as I actually pay them.

Somehow I doubt the residents of One Hyde Park were exactly quaking in their handmade beds, and much as I dislike the fact that there are people living in £140m apartments whilst normal working people are priced out of their own capital city, neither should they be. At least not until the revolution is organized with a slightly more coherent agenda than free trainers for all.

As a result, it seems fairly fatuous to pontificate about on the joys of Mien Tay’s delightful signature quail starter with honey, garlic and spices or the fact that I reckon they’re a fairly strong contender for best pho in town. But I’m gonna.

I was recently working overseas with the Bath based shotgun enthusiast and rib preparer Nick Page who asked me if I’d tried the Vietnamese opposite the old Battersea Jongleurs that he’d stumbled upon by accident some time ago. When a restaurant’s fan base extends to the West Country via a dinner table in Cyprus, you know it’s a good idea to book. I haven’t been to Mien Tay when it hasn’t been full, which might explain the slightly brusque nature of the service, but in my experience they’re just being quick because they are busy, and with food this good, I really don’t mind. There are upstairs and downstairs rooms, gaudily decorated with plastic vines and bright colours, and the whole place hums with a combination of industry and the chatter of happy eaters. 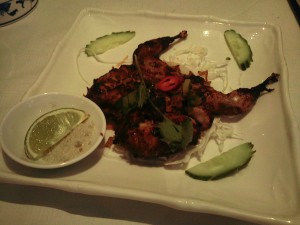 Quail with honey, garlic and spices

One day I will be organized enough to order the Seafood Claypot 24 hours in advance, which is merely one of the many dishes I haven’t got round to yet because other ones keep on getting in the way. I didn’t have the sea bass with mango or the pork and beansprout pancake this time either because, frankly, I was busy, but I can definitely recommend them from previous visits. I had to start with the quail – spatchcocked and sticky and moist and delicious. A small squeeze of lime and a dip in what I think is just salt and pepper and you’ve got one of the best starters in London. Even A.A. Gill liked it, but I can’t help ordering it despite that. Exemplary prawn summer rolls were followed by the aforementioned pho for her – she had ordered the sliced steak version but by the time anyone had noticed that this one also contained meatballs she was halfway through it. I can’t be bothered with adjectives – just order a bowl, add whatever bits you like and you should understand what I’m on about. 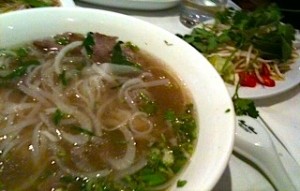 I went for a simple vegetable noodle dish and morning glory – water spinach with soy sauce and garlic – which were both tasty and fulfilled some sort of amorphous five-a-day concept that was floating around in the back of my mind. They were also the perfect accompaniment to my chargrilled goat. We don’t eat a lot of goat, but this is a fine place to start – strips of juicy, gamey meat tapering out to slightly carbonized ends with a little caramelized onion and chilli. According to an elderly Vietnamese woman who was at the table next to Nick when he ate here, it also puts lead in your pencil, which is handy to know, and just the way you want to find out.

I nearly ordered the Vietnamese rainbow drink (mung beans, gelatinous seaweed and coconut milk) in the name of research, but then decided I wasn’t feeling quite that inquisitive, so we got the bill, which arrived with some fresh orange segments. £35 for this little lot seems pretty reasonable, even if we stuck to sparkling water – there is a wine list, but they don’t mind if you bring your own. One other little caveat is that they don’t take cards, but I was prepared and perfectly ready to hand over cash.

Imagine that – handing over cash? What a novel idea. I’m not sure if Mien Tay was unfortunate enough to have its windows kicked in during the idiocy that followed (I certainly wouldn’t mess with the lady who usually seems to be in charge,) but might I suggest you head down there to a fabulous restaurant in an area that now needs to support its local businesses far more than it thought it did before Croydon facelift and dumb-ass hoodboy rolled into town.