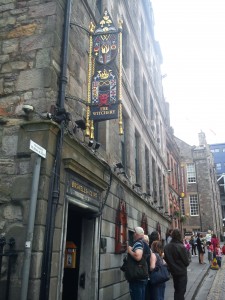 I’m at the Edinburgh Festival. I’ve been here for three weeks doing a minimum of two shows a day, but on occasion as many as six. As a result, all objective reasoning has been beaten out of me and I no longer have any trustworthy critical faculties. All of which makes me ideally placed to write this review, judging by the amount of critics here working for obscure websites, which now appear to outnumber the performers.

I have no interest in relaying my Edinburgh experience – Food Ponce in many ways came about because I wanted to do a blog that didn’t have anything to do with my day (night) job, although it does inevitably intrude. If you’ve been to the Festival, you’ll know what it’s like, if you haven’t, do come – it is an experience like no other. However, there seems very little point in complaining about the ‘emotional rollercoaster’ to those who aren’t on board, and, far more importantly, have proper jobs and lives to get on with and are unsurprisingly unimpressed by a bunch of show offs congregating in one city for all of August to bark at each other.

What I will say is that both of the main shows I am in have received rave reviews and critical maulings, sometimes on the same day, and the one thing I am very pleased about is that I stuck with my decision to have my first ever alcohol free festival as I’m pretty sure it has helped me stay sane throughout. If anyone is in Hotel du Vin from about 19:51 on Sunday, however, I would like to take this opportunity to apologise for my behaviour from about 19:55 onwards. 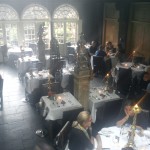 I will at least have a reasonable excuse, which is perhaps more than one can say for The Witchery, an Edinburgh institution that I took my flatmate, the excellent Hal Cruttenden, to on our day off. Our raciest excesses this year have been a mild addiction to Ben and Jerry’s Cherry Garcia frozen yoghurt, (although Hal did drink four whole pints one night which has cemented his reputation as the wild man of comedy.) Booking one of Edinburgh’s best restaurants for lunch was as close to exciting as we were going to get, and we were excited as we walked up to The Castle, thinking, quite rightly, that as prime locations go, you don’t get much primer than this. We didn’t even mind hanging around outside for a while as our table wasn’t ready – as anyone will tell you, if you can’t get a seat for something in Edinburgh in August, you’re probably on to a good thing. The room itself is fairly magnificent in an ‘I know I’m fairly magnificent’ way. It’s even called ‘The Secret Garden’, although it’s hardly The Witchery’s fault that you can’t sit in rooms like this any more without expecting a game of Quidditch to break out nearby. 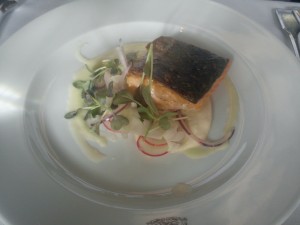 It is their fault, however, that the restaurant really didn’t seem quite busy enough to justify the wait for the table, or, as it turned out, everything else. A majority of the tables were full, mostly of what were quite obviously tourists, but this is not a criticism – tourists need to eat too, and, let’s face it, as non-residents paying enormous sums to stay in the city, Hal and I were as much tourists as the pastel coloured Americans just behind us or the Japanese businessmen across the way. Impressive leather bound menus were proffered fairly quickly, but after that, time seemed to slow to a standstill, and that is the kind of magic no restaurant needs to deliver. If you’re going to offer bread, I’m personally in favour of doing so straight away. I’m a bit old-fashioned like that with drinks orders too, and I’m even more impressed if you get them right. To be fair, it was only a bottle of still instead of sparkling water, and I could write these mistakes off as mostly bad luck – this was, after all, the legendary Witchery, which many people had ooh-ed and ah-ed at when I said I was coming. The menu contained lots of history on both the building and the restaurant’s four decades of excellence, which I was able to read in quite some depth as no one seemed particularly interested in taking my order from it. When I eventually managed to beckon someone over, I had crossed the line from understanding to irritable, or ‘turned into my dad’ to be more accurate. Much of the menu, with its emphasis on seafood and game, looked delicious, but with main courses often hovering above £25, we decided to go for the Table d’Hote – three courses for £30 seemed a good way of enjoying a little luxury without adding any more to the Edinburgh economy than we already had in rent. 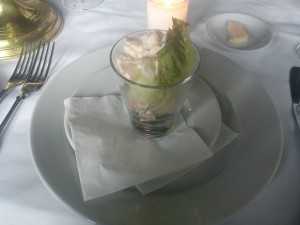 At this point, sun dried tomato bread appeared, which could explain why it appeared to be so tired. Hal’s hot smoked Loch Duart salmon was the dish of the day – a generous portion of moist and very tasty fish tempered by cauliflower puree, radish and a light cucumber dressing. I mention the full title of my verrine of oak-smoked ham hock with cider sorbet and Granny Smith espuma mainly to underline that there was quite a lot of it to fit into a glass, which was then rather difficult to eat from with a knife and fork. The flavours were good, even if I could have done without the addition of some quite elderly lettuce, but who eats sorbet with a fork? From a glass? These are exactly the sort of touches that would have been forgiven if I hadn’t already turned into my dad. 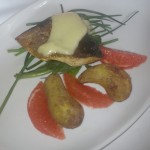 The wait for the mains meant that they were already unlikely to save the day, and when they arrived, they were hugely disappointing. I don’t think it’s unreasonable to expect a main course portion of fish to be larger than a starter one, and I don’t expect one of Scotland’s top restaurants to overcook a piece of sea trout. Or for that matter, to slow-cook a lamb rump until it’s dry, stringy and actually unpleasant. Sea plantain was an interesting touch, but the salt-baking of the new potatoes did little to improve them in my eyes, although that might just be because they were sitting next to that piece of fish. Broccoli with anchovy butter sounded very nice, but was unfortunately more like broccoli in salt water, which for four quid is just depressing. When the plates were eventually cleared, an hour and twenty minutes after our table had been booked, we were asked if we might like a break before dessert, which did at least give Tim Vine some competition for joke of the fringe. 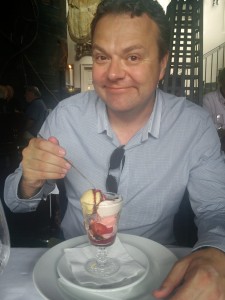 Hal seemed fairly happy with his knickerbocker glory even if it wasn’t Ben and Jerry’s, but I couldn’t quite make my mind up about my marmalade brulée. I might have liked it if I was in a better mood, but marmalade and caramel together just seemed a touch of sweetness too far. Et tu brulée? The bill came to £72.45 without service, or alcohol, although I am surprised that the lack of one didn’t push us over into reliance on the other.

I know that Edinburgh is a tough place in August, and I am the last person who would wish a bad review on anyone, because I know how it feels, but The Witchery was anything but a hit with me. I very much doubt it will affect their numbers – a combination of location and reputation will ensure that they remain a hot ticket, but on this evidence they are not so much resting on their laurels as passed out comatose on them. As is often the case with the Festival, you may have a better time with an undiscovered gem than relying on a performer that seems to be very much going through the motions.