I like reading about restaurants – as I hope do you. My favourite reviewer used to be Jay Rayner in The Observer, but I think he may recently have been usurped in my affections by Marina O’Loughlin of The Guardian, who writes beautifully, has a tendency to create perfect terms when the language has been too short-sighted to provide them itself, and generally manages to make being a food nerd seem a very funky occupation. These preferences may reflect my newspaper choices as much as anything, but I have also worked with Giles Coren who is a very nice chap even if he hardly stopped talking once in four hours (which is rich coming from me) and we’ve had the pleasure of Matthew Norman’s company twice on No Pressure To Be Funny. I’m still annoyed he took Nick Revell along for one of his reviews, but the meal, at Gregg’s Table was clearly so hilariously bad that I didn’t miss much. He did promise to take me some time, which I mention here just in case he’s reading. Hello Matthew (*cough*.) I sometimes have a look at Fay Maschler in the Standard and I am a big fan of Charles Campion, who brilliantly pulls off an understated love of elegant simplicity whilst looking so unfeasibly like Peter Griffin from Family Guy you lose even more faith in Seth MacFarlane than you did after the Oscars. 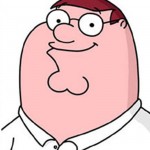 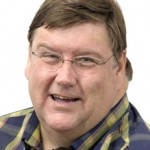 A.A. Gill just gets on my tits.

As anyone who has been to the Edinburgh Festival will tell you, everyone’s now a reviewer, including me, so it is important to work out whose opinions you value if you want to pass them on. My friend Wayne Deakin was in Bristol for a weekend and asked me if I had any recommendations for lunch, and I recalled an absolute rave from Ms. O’Loughlin for Bell’s Diner. Wayne also raved, and so when we found ourselves in Bristol a couple of weeks later, we booked a table and headed down to Montpelier to see for ourselves. There was a review in the FT that day as well. It was another rave. Seriously – there haven’t been this many raves in the West Country since the early nineties. 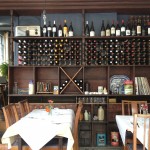 Montpelier is a rather funky/bohemian and yet somewhat down at heel district. This is Banksy’s home turf and he is responsible for a lot of the great street art, although his influence has opened the way for a wide range of other artists to veer between brilliant and quite awful. I used to visit regularly as it was home to the now defunct Jesters Comedy Club and have always been very fond of the area. It is not for nothing that there were riots here a couple of years ago because Tesco was trying to move in and the assorted people of the republic of Stokes Croft just didn’t want them. It would have got in the way of the bicycle shops, galleries and myriad pubs and odd little shops selling odd little things. 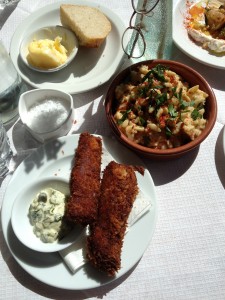 Bell’s Diner is almost the apotheosis of this charm – a bright corner building with big windows to throw light on to what is a delightfully artlessly designed space. It takes a lot of good taste to be this artless, and the whole operation retains a sort of unshowy eccentricity that has to be organic to work. And it does. How many other waitresses could show you that day’s FT review merely in the spirit of sharing, without the merest hint of showing off? Where else would buy a collection of old reading glasses just to put randomly on the tables for the hell of it? And where else would have a dansette in the corner and leave DJing duties to the customer? (Fleetwood Mac and then Paco Peña since you ask.) 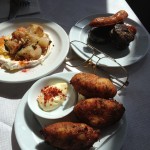 And then there’s the food. Having ordered a couple of excellent coffees, we were brought still warm bread with Abernethy butter that was so good we had to be careful not to accidentally make it lunch by itself. There was a plate de jour of grilled chicken oyster, but as everything else came in small plates, we ordered eight of them between us, at which point one of our two lovely waitresses pointed out that with the three for £10 offer, it would be cheaper if we ordered another as well. There is something unspeakably brilliant about ordering everything on a menu, and there was something unspeakably brilliant about what arrived shortly afterwards. 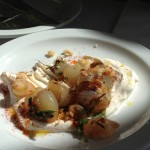 I don’t like salt cod. Well, I didn’t until I tried their fritters with aioli and suddenly it was all salty fried pillows and punchy garlic smoothness. Slow-cooked cauliflower in yoghurt with caramelized butter and pinenuts was silky and toothsome. We had astonishing smoked onions with paprika and labneh which I can still taste as I type – and a number of palate cleansing combos such as an excellent feta, watermelon and mint salad. Lamb St Menehold might have been a touch too fatty were it not set off by a zinging tartare sauce, and another tomato and goat’s curd salad to take the edge off. There was morcilla and chorizo and spiced lentils – all kinds of dizzying combinations which managed to be thoroughly individual and yet perfectly complimentary at the same time. We did order quite a lot, and we left not a scrap.

LMP. How it should be.

Greed had now taken over, and we were not going to skimp on puddings. A perfect vanilla panacotta with strawberries was mildly superceded by a lemon meringue pie that made me want to take it back to school to show those responsible for my lifelong aversion to this dish exactly what they had done so horribly wrong. 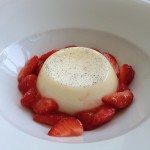 A couple of espressos and a bill of £54 excluding service left us feeling thoroughly replete and as sunnily disposed to the world as the September rays warming us through the window panes. A short stroll around the block later, we got back in the car and I reflected that although the local comedy club may be no more, there is still every reason to return to Montpelier when there are raves like this to be had.