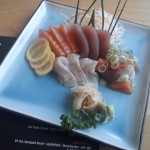 Sapporo sashimi. Unsurprisingly, not available on Qatar Airways. Well, not my bit, anyway.

I didn’t expect to find myself writing this. I thought I might kill a little time during my six and a half hour Qatar Airways flight to Doha writing a blog, before stopping off for a while at one of the world’s more tedious airports. After that it’s another seven hours until I reach Singapore, by which point I’ll probably just want to cry. I was going to write about Sapporo Teppanyaki, a regular haunt of mine whenever I play Manchester Comedy Store, but a waiting time of thirty minutes before I even ordered in a restaurant boasting two other occupied tables means I’m not going to, no matter how good the sashimi, average the vegetable tempura and excellent the Tori chicken noodle soup. In fairness to the manager, when all this was mentioned in my customary, clipped ‘I consider myself a thoroughly reasonable human being, but I am bloody irritated’ dad voice, he did give me 25% off my bill, but what neither of us realized was that his real loss would be the absence of a proper appearance in Food Ponce. Culinary empires have crumbled for less. 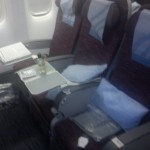 The other reason is that I appear to be having one of those flights. Most long hauls are uncomfortable affairs, especially when you haven’t found time to check in online and are consequently wedged into a middle seat with a dodgy headphone connection, between two unfriendly men with outrageous elbows. You resist the temptation to weep a little as you settle down for a purgatorial viewing of movies you were never particularly bothered about missing in the first place. Sometimes, of course (in my experience twice in 15 years of regular international travel) you get upgraded, and every now and then, something truly awful happens (I’m talking to you, vomiting hippo man of Boston,) but generally, for those of us condemned to a life of cattle class, international air travel is bearable, if unmemorable. This flight was looking like being on the lower rungs of acceptability, but sharper readers will have gathered that I am unlikely to be writing about a man’s elbows if they are obscuring my view as I type. I didn’t even get to test the headphone socket. I boarded last, and lo and behold, in front of my designated seat (the irksome 11J) lay an entirely empty row of that traveller’s nirvana, the extra legroom seats. Like a scavenger on the Serengeti discovering a fresh kill, I darted cunning glances about me, beckoned an air hostess over and uttered the immortal words,

Reader, she said yes. (Frequent flyers among you may just have punched the air.) 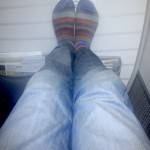 It is amazing how little things can improve your airborne experience so enormously. We all know the tantalizing sense of impatience as you shoot more sideways looks around to see if any interlopers are attempting to muscle in on your territory, and the rush of tiny triumph as you realize that this veritable kingdom is yours for the ENTIRE JOURNEY. What I didn’t expect was for this minor euphoria to be compounded by the meal.

Ah, airplane food – the last refuge of the hack comedian, a subject so tired it’s almost worth writing about because you know anyone with any taste won’t have done so recently. A couple of months ago, I saw an irate neighbour’s spoof review of an all night karaoke party, and the author was revealed to be Oli Beale, the same man whose hilarious write up of a Virgin Atlantic meal had similarly gone viral a few years ago. Seriously, read it. It’s much funnier than this. I would love to get Food Ponce to go viral, but it seems highly unlikely as I’m going to be quite complimentary, and that, as we all know, is not funny at all.

I was already very well disposed towards the hostesses, and the first thing they delivered after take off was a nicely balanced vodka and tonic with lemon and none of that arsing about with miniatures too big for the amount of tonic available, which have led to me getting far too drunk far too quickly on far too many aeroplanes. These came with some Bombay mix cocktail nibbles that were actually edible rather than those tiny sawdust parcels that leave the inside of your mouth feeling like the outside of the Sahara. 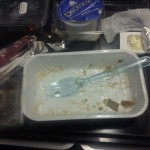 These were followed rapidly (certainly more rapidly than at Sapporo) by my meal. I was offered fish with mash potato, but as these are rarely items that eat well in mid-air, I went for chicken and rice. This arrived with a little loaf of two halves, one brown, one white, which was warm and tasted of bread, which is a first. A chickpea salad came with a light herb and chilli dressing and a little red onion, and as a less than avid fan of the chickpea, I surprised myself by finishing the lot. Lifting the foil on an airplane meal is never a pleasant task, as memories of previous disappointments cloud your vision while you attempt not to flick any stray sauces on to the clothes you’ll be wearing for the next fifteen hours. However, not only was what lay beneath not bad at all, I actively enjoyed it. Egg-fried rice would not have won any fluffiness awards, but tasted very good, with some genuine heat coming from the chopped chilli accompanying the chicken. To be honest, the less said about the ‘batter’ surrounding it the better, and the same goes for the colour of the cauliflower and carrots alongside, but both tasted like they were meant to, and the vegetables were even a little al dente, which I consider a minor miracle.

A very reasonable apple torte strudely thing came and went in seconds, and a little oblong of Croxton Manor cheddar finished things off very pleasingly, or would have done, had I not discovered a small piece of dark Valrhona chocolate, which pleased me even more. This was all washed down with a Chilean Sauvignon Blanc so perfectly acceptable that I’ve just ordered another one. I do know that the photos on this blog are not necessarily amongst its highlights, but you’ll excuse the lack of any pictures of the food as it wasn’t until I’d finished (all of) it that I realized this was one of the best airplane meals I’ve ever eaten. Ironically, the best was on Virgin Atlantic (It was 15 years ago and I’d been upgraded.)

As I wrote that last paragraph, someone approached and politely asked if I had any objections to them occupying 10H. I’m surprised it took him so long, and do you know what? After that meal and with my wine having just arrived, I really don’t. I’m going to stretch my legs out and see if they’ve got The Lion King. I may even purr.