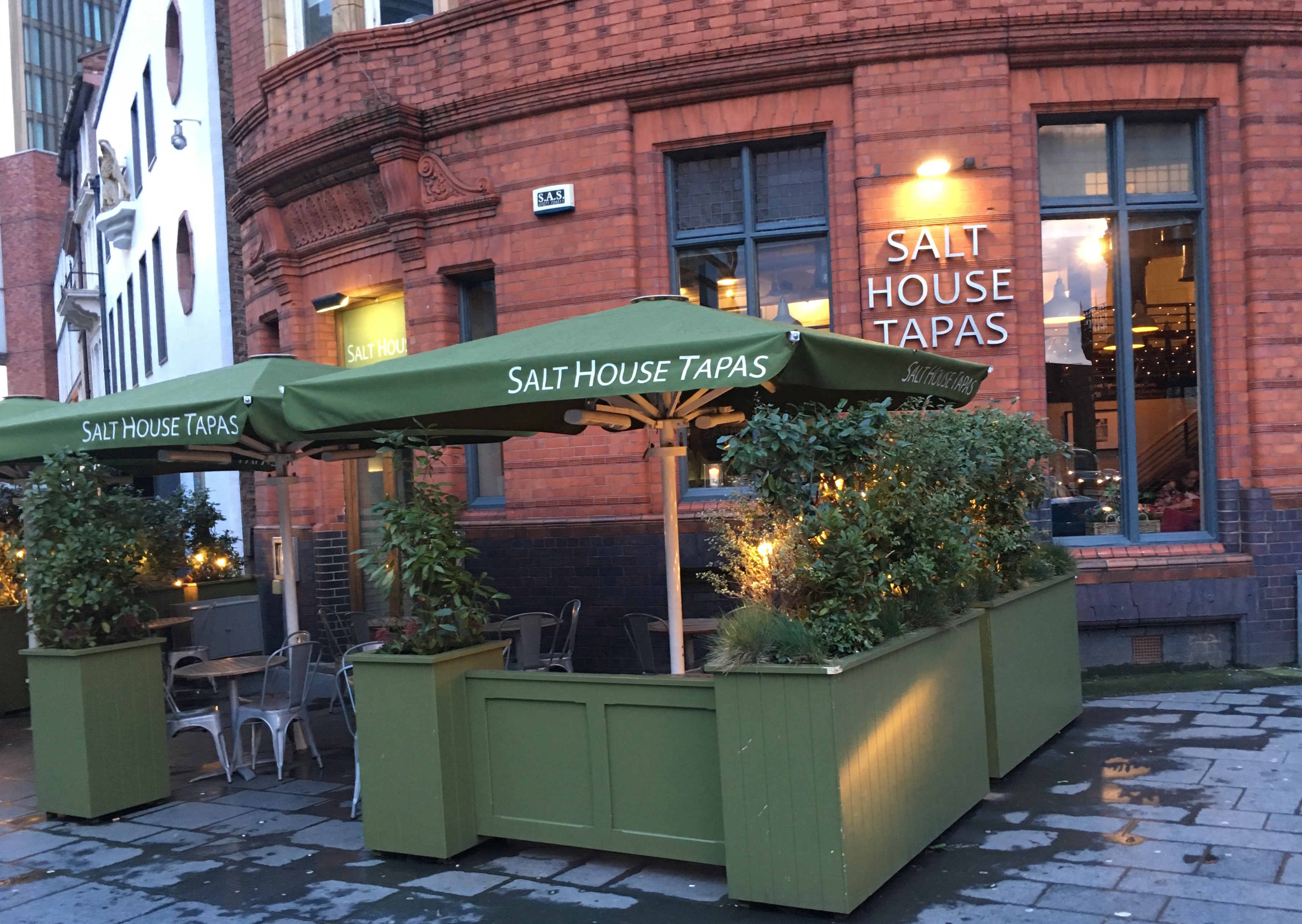 Well, this was a teeny bit crap, to be honest. I apologise for laying my cards on the table so early, but this is a review, not a whodunnit. I’m also very sorry to anyone from Salt House Tapas who reads this and thinks it’s a bit unfair, mainly because the reason it was a teeny bit crap was, I’m afraid, mostly down to the service. And I want to apologise to them again if that hurts their feelings, because they seemed like lovely people, just not very good at, you know, serving lunch.

I was up in Liverpool for the weekend to play the soon-to-be legendary Hot Water Comedy Club, which seems to be redefining how successful a relatively small club can be – four shows on Saturday including two almost unheard of (for the club circuit) matinees. This is very good news both for comedy, and comedians. They also use social media in a way that is revolutionising how they publicise themselves. It was for this reason I checked out of my AirBnB first thing on Sunday morning, and had a day to kill around town before taping an hour long special for their new YouTube subscription channel that evening.

There’s only so many times in a day you can write out the set list you intend to do before going slightly mad, (especially as events can conspire to alter the running order quite so conspicuously, more of which later,) so I had made a mental note to find somewhere nice for lunch. Having already had a (very good, but very bad) burger in Almost Famous the previous evening and spent most of Sunday nicking the WiFi from Joe and The Juice in John Lewis, my main consideration was finding somewhere that wasn’t playing house and techno at ear-splitting volumes. I don’t even know if they’re called that any more, I just know I don’t want to pay £5.20 for a carrot, apple and ginger juice whilst feeling like it’s 3am at Manumission in 1992.

I had passed Salt House Tapas on my walk to work every night of my stay, so I took the only plausible option on day four and walked in instead. I had already had a good (and sizeable) breakfast at Bill’s around the corner earlier, so there was no need to go full on crazy, however tempting the menu appeared. One of the great joys of tapas, of course, being that you can meander round a menu a fair bit without breaking the bank or the waistband.

I was a little put out to find they had run out of padron peppers – those carbonized, salty packages of goodness which are usually first on my order, but these things happen. There was a three plate plus bread option for £12.95, so I opted for sea bass, tenderstem broccoli and an apple, grape, avocado and rocket salad. And if you know anything about me at all, you’ll know I also ordered a large plate of cured meats that cost more than everything else combined.

There was a bit of confusion while taking the order, mainly down to the waitress struggling a little with my accent. This was nothing to do with a Scouse/London divide. She was, I’m pretty certain, Spanish, and even if her English was a little halting, I’m hardly likely to complain at being served tapas by a Spaniard, especially when the first thing she brought me was some sourdough that was so chewy, crusty and downright delicious I almost didn’t dip it in a good olive oil. I was actually pleased with the small portion as otherwise I could have quite happily scarfed an entire loaf.

This is when the problems began. A beautiful portion of hand carved Iberico D.O.P Bellota ham arrived, and I greedily polished of a few rosy shards. Thing was, it wasn’t what I had ordered as there was no chorizo or salchichón. When I pointed this out, I was rather hoping they might bring them separately and all would be well with the world. But no, dear reader, they took the plate.

Never separate an Al Barrie from his Iberico – the whimper could be heard in the Wirral. But fair enough. A short while later, my sea bass appeared and was really rather good, all crispy skin and succulent flesh cleverly offset with charred leeks and a fruity green olive tapenade. I thought about trying to ration myself til everything else arrived, but rationing is not one of my strong points, and it was all gone even before the replacement charcuterie arrived. If the shoulder was all silky, salty excellence, the chorizo was a little disappointing – slightly dry and not as punchy as it might have been. The saltichón was perfectly serviceable, and I would have been thoroughly content if only everything else had arrived.

By this time, another table had sat down a couple of feet away and ordered. I had finished my charcuterie and watched, a little put out, as their food was delivered. They had prawns, soup, a salad, and something else hot that I couldn’t identify without leaning across and pinching a forkful, which I was sorely tempted to do as my salad and broccoli still hadn’t arrived. Eventually I called another waitress over to ask where they were, and was asked, slightly primly, if I’d been informed that everything was prepared from fresh and arrived in the order it was cooked. I avoided the temptation to point out that a salad needed very little cooking, and spent the next couple of minutes looking pointedly at my neighbours’ plates in a peculiarly British display of non-complaining. My Spanish waitress then came over to explain that everything was prepared from fresh and arrived in the order it was cooked. I wanted to say, “I know. That’s how tapas works,” but I didn’t. I may have been getting a little irritable by now. Eventually my food arrived, but clearly assembling a perfectly simple salad and charring a little broccoli in the mid afternoon lull could only have taken this long if they had forgotten about them. The former was fine (and fresh) and the latter was perfectly acceptable even if the accompanying ‘hazelnut tarator and pumpkin and sesame crumb’ hardly screamed nutty seedy craziness. There was a perfunctory apology for the wait, but what would have been really nice was some ham, bread and sea bass to go with it.

These were not bad ingredients – in some cases they were superb, but the final irritation was still to come when the bill arrived. I had been charged £9 for the plate of ham I had sent back, but not the £13.50 for the plate I eventually received. Being a generally moral sort, I pointed this out, which I think would have been the perfect opportunity to make amends by waiving the extra charge, and this would have been a much happier piece of writing. Instead, an amended bill was brought with the full price now coming to £28. I like to think I’m a generous tipper, and I still left a couple of quid – I’m not a monster – but at £30 for a light lunch, I would suggest Salt House Tapas should do better. Liverpool is a hell of a party town with a thriving restaurant scene, and next time I imagine I will carry on walking past rather than in, rather as the couple who were thrown out of my show later (and then arrested,) probably wish they had done. The staff and management at Hot Water were brilliant, and the fact it hardy disrupted the gig at all was testament to their skill at dealing with a potentially tricky situation. Perhaps they might head down the road to show Salt House Tapas how to handle a much more trivial matter that could have been dealt with very effectively by the simple application of a little common sense.