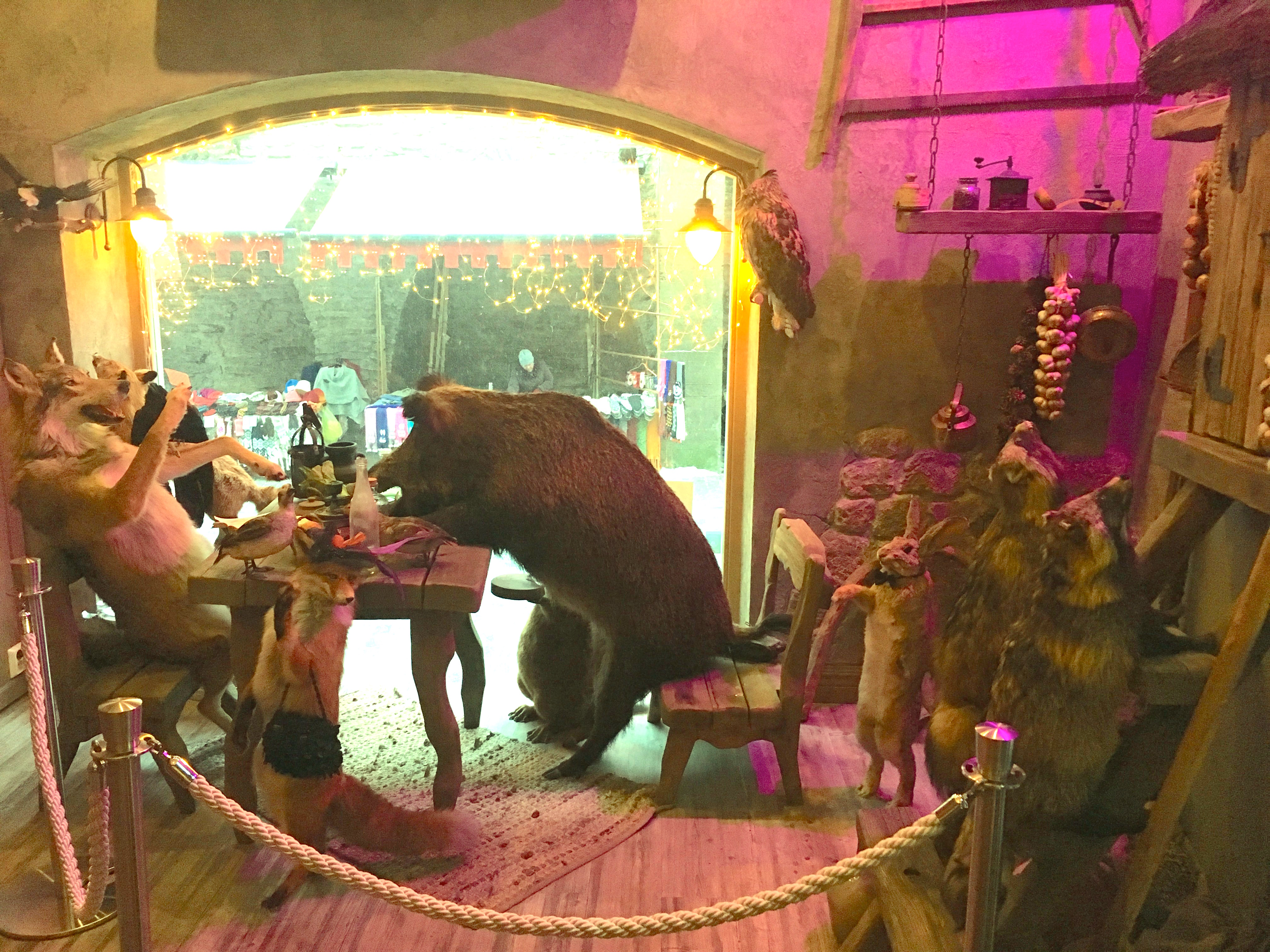 Well I wasn’t even going to blog it, but as I now find myself with four hours to kill in Oslo airport having just spent £18 on an unexceptional burrito and a bottle of water, I need something to occupy myself, and writing about Estonian cuisine just seems the obvious choice to distract myself from bankruptcy.

I was delighted to find myself back in Tallinn at the Komeediklubi (sorry, fluent Estonian, don’t like to show off,) working for my good friend Andrus Purde. I was even more pleased to find I was travelling with Nick Doody, an exceptional comic and thoroughly good egg whom I have known for nearly twenty years. The only problem was the fact our flight had been at 7am, it was lunchtime, -10 and we really wanted to eat. We took a wander around the Old Town and eventually plumped for Farm, mainly because the menu looked good, and only partly to avoid a man who was asking Nick for money. Once inside I knew we had hit some kind of jackpot simply by virtue of the utterly baffling display of stuffed animals playing cards in the lobby, as though some ambitious Estonian taxidermist had seen one of those old pictures of dogs playing snooker and really decided to up the ante.

I always love it when the guardian of a conspicuously empty restaurant asks if you have a reservation, and then makes quite a play of checking the bookings when it is abundantly clear they could happily sit you at one of about fifty tables, but this was a fairly short-lived amusement, and we were soon shown to a large table near an open, glass-walled kitchen. I wasn’t wild about the décor – it looked as though a department store designer had been handed a brief marked ‘rustic’– but it was neat, tidy and clearly designed to appeal to tourists, which was handy, as that’s essentially what we were.

And I have to say it did appeal, hugely. The menu was a fascinating collection of game, fish, berries, herbs and the heartiness of Eastern European cooking with a Baltic influence. By which I mean there was potentially a lot of sour cream about. There was even a decent vegetarian option of mushroom cutlets, even if I could tell their heart wasn’t really in it. It wasn’t cheap either, with most main courses starting around the teens upwards, and one does tend to get a lot less for one’s Euro these days, so we opted to have mains only. But first we were brought Estonian black bread, baked in house and not something I thought I always appreciated. As I said to Nick, if it looked like cake, it should bloody well taste like cake. Our charming waitress informed us it was best enjoyed with butter and a few flakes of sea salt, although, as Nick pointed out, everything tastes better with butter and a few flakes of sea salt. What I was not expecting was for it to genuinely taste like cake, and really good cake at that. This was helped along merrily with a couple of glasses of local beer – a pilsener for Nick and a ‘red’ beer for me which was a delicious, full bodied challenge to order a second, which we nobly refused to do because, you know, professionalism.

When the mains arrived, possibly my only criticism was the portions were slightly less hearty than the ingredients, but my grilled ox heart with potato and roasted garlic cream was a tender, meaty delight, nicely enlivened by a few smears of juniper and some perfectly cooked yellow beets and green beans. The only slight misstep was a quenelle of tarragon butter that I didn’t think really qualified as a sauce, but then the dish didn’t really need it, and besides, it went very well on a second order of bread. Nick pronounced his pike fillet excellent, if a little bony, but then that is rather like attempting to leave the EU, then finding it was a little more complicated than living up to a slogan on the side of a bus. It is par for the course.

We decide to call it a day at that point despite being mildly tempted by a selection of dairy based desserts that I’m sure would have cleansed our palates admirably. The bill came to €45, including exemplary service, and with this level of cooking really resembled something of a bargain. There is an element of the tourist trap to the place, with its in-house bakery and adjoining café on site, but then if you’re going to trap me somewhere, feed me excellent beer, bread and intriguing flavour combinations while I natter away to an old friend, you are unlikely to find me complaining. We walked back out of the front door to discover three stuffed owls sitting on a grand piano that thankfully no one had started playing while we ate, and I wrote something complimentary in the guest book while our coats were retrieved. I fully intend to return to Farm next time I’m in Tallin, where I very much look forward to enjoying Estonian gastronomy again, if not, possibly, the taxidermy that may well make some of it possible.